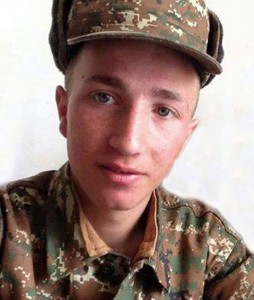 Sergeant Robert Abajyan, by decree of the NKR President, was posthumously awarded the title “Hero of Artsakh” and awarded the “Golden Eagle”.

The enemy who renew the war, unexpectedly met all the heroic resistance of the Armenian soldiers, suffered many losses and was thrown back. Of the numerous feats of Armenian officers and soldiers we present the following.

Sergeant Robert Abajyan, during fierce fighting was wounded, lost his commander and comrades but continued to provide resistance to the enemy to the last bullet. He brings his seriously wounded comrade in the trench cell, which was located at a distance of 30m, there he contacts with the battalion commander, provides important information on the operational situation. He finds the strength to warn about the danger to the commander of the group that hurried to his aid. Robert was able to attract the attention of five enemy soldiers, in close combat with the two of them detonates a grenade.

The sergeant demonstrated personal courage and determination to defend the position, and on the cost of life remained faithful to the military oath.

This heroic act filled with fury the hearts of Major Maloyan and other fighters who attacked the position and with the same courage took it back, destroying enemy manpower and forcing the Azerbaijanis to retreat to their original positions.