FROM THE DIARY FRONT-LINE SOLDIER

The first person you kill in a war is YOU.

I woke up early in the morning in a high mood. I had to go look for an area for a car factory. It has been several months since I came to the Homeland from the United States, but the work of establishing a machine-building factory in Armenia was not progressing, we did not even find a place. In any case, I was in a good mood. I wanted to call the military unit, Areni, then I thought, I would dig into Facebook a little before the day started. In the morning the service of the soldiers is more tense. The first news I read on Facebook was like a hammer blow to my head. The Azeris attacked along the entire Artsakh border, using all the weapons in their arsenal. My heart was kind of heavy with guilt. We should not leave the Artsakh war to our sons. During the first war, while Azerbaijan was weak and defeated, we had to force it to sign a capitulation agreement and recognize Artsakh’s independence. Or at least after that we should not have dragged this burden for 30 years, we should have turned the ceasefire into a lasting peace. What happened? Now my son and his peers are in the army, and as soon as they feel the pain and tragedy of the war, they must do what we did not do. Vigen and Shant had already woken up, their mother was preparing breakfast. Without saying a word, I left the house and left for the military commissariat. The yard of the military commissariat was crowded, everyone was walking towards the school in front, where the officers were queuing up for volunteers.

“Wait for our call,” the military commissariat employee registered my name. I came home.

“I am coming with you,” said Shant. That was all I needed.

– War is not a place for children, all that remains is to take 12-year-old Vigen and leave his mother completely alone. Your brother is in the army, should one of your mother and Vigen rule or not? If you have not reached conscription age, you have nothing to do on the battlefield. The news on Facebook was becoming more alarming, and there was no noise from the military commissariat. The wait was pointless. Shant and I went to a military store, bought boots and some other necessary things, then left for the military commissariat. We had just approached the building, Shant said.

– Wow, uncle with Davit and Shahen. My brother Aram came to the military commissariat with his two sons to go to Artsakh. 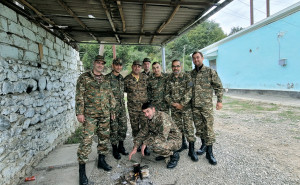 Friends of one day and one life

“There are not 10 days since Shahen got married, persuade him to go home, there is no man left among us,” I said. Aram did not answer anything. Military commissariat, buses were already lined up nearby. At first they called Araments. We somehow persuaded Shahen to go home. Aram and Davit got on the bus. I wanted to get rid of bad thoughts, but I involuntarily thought, maybe this is the last time I see them. The flow of people in the yard of the military commissariat was increasing. And I was not persistently called.

“Your name is not on the list,” said the military commissariat employee, “but if one of the officers is missing, you will go instead.”

Fortunately, someone was missing, and I finally got on the next bus to the front. The noise of the car wheels mingled with the voices of the talking people and created a real noise. I strained my hearing and tried to understand the situation on the front. There was only one consolation. Everyone was in a good mood, there was no alarm, no panic. This war had to end quickly, quickly and finally. And most importantly, we had to take the weapon from the soldier and fight for him, because this was our fight, our unfinished struggle, and we had to put an end to it. Aren never left my mind. Three years ago my sons came to Armenia with their mother, I stayed in the United States because I could not move my space engine factory in America to Armenia at once. I just wanted to start a business in the Homeland, and then a war started. And Aren is in the army, he is a soldier, an artilleryman. We arrived in Artsakh at midnight. Everything was peaceful, there were no shots fired, but Stepanakert was buried in thick darkness, hidden so that the enemy would not target homes and people. Then they took us to Haykazov military unit. In fact, there was no military unit. was completely destroyed by the bombing. We were placed in barracks. We were all tired, and many fell asleep as soon as we lay down.

Daylight made the image of the ruined barracks more complete and overwhelming. We were given a uniform. Stepanakert was close, on foot, we went to get food. It was clear that no one was going to feed us in the military unit. Then I tried to call Aram, but it turned out that in order to have a telephone connection in Artsakh, you only have to use the connection of “Karabakh Telecom”. What nonsense! I got a card from Stepanakert and called. Aram and Davit were also in Haykazov’s military unit, just in another barracks. We met in the afternoon. We were all tense, we did not understand why we were sitting in the military unit, why we were not going to positions. Why don’t we get a combat mission? At dawn, the Azeris started bombing. The boys said that kamikazes were exploding nearby, they were drones that our officers had known since the April war. As soon as the light came on, we filled the “Urals” and set off. I was anti-tank during my term of office I was the commander of a rocket platoon, I had to lead a platoon of “Grad” installations. That’s all they said. Officers, contractors, volunteers and soldiers greeted us at the base. I got my platoon, so to speak. They were glorious boys, eating the heart of a lion. Who can you not beat with these? I did not manage to recognize them by name. Everyone was talking about a quick counterattack. They said it was a war of drones and long-range weapons. The enemy strikes with “Smerch”. It turned out that the commander of the brigade was Arenis’s friend, they had served together in Lusakert. He was a tough, hard-hearted boy. I am waiting for a combat mission. We are waiting with the whole platoon … 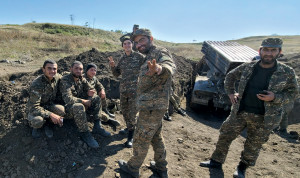 A five-minute break of chaos 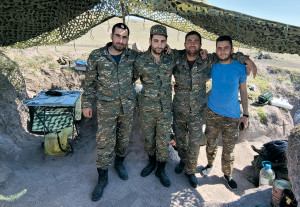 Friends of destiny – to death 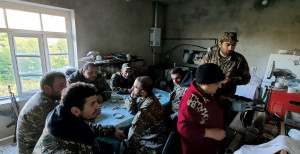 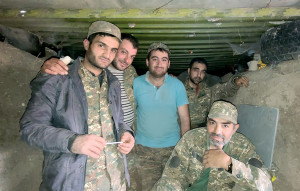 In war as in war 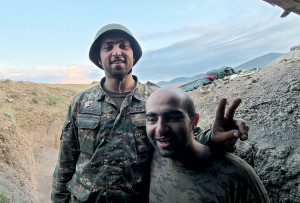