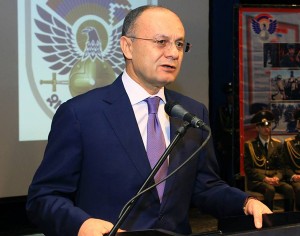 – Current year for Armenian army even though was tensed, but it was also successful, – said Defense Minister Seyran Ohanyan to the journalists after the meeting with parents and relatives of servicemen in the Center administrative region of Yerevan on December 21, and mentioned that the final report on 2014 will be in the end of January on the occasion of the Day of Army.

– Our victories – that is professional activities of our sub-units, success in combat training, in Russia the victories of our tankers in biathlon and cadets of Educational Complex after Monte Melkonyan. 2014 was declared as a year of fight against street manners under the slogan “Army is our house, our fortress”. Joint work of universities, schools, law enforcement agencies and the general public ended up with some success. We can say that discipline in the army strengthened, 2,5 times decreased criminal cases, and all that – through increased responsibility of commanders. The result of our joint work with schools we’ll see in the coming years, when today’s schoolpupils will join the army, – said the Minister.

Seyran Ohanyan assured that success will continue in 2015, and the Armenian army with the same integrity and responsibility will continue to defend our peace, our country.

DISPROPORTIONATE RESPONSE IS GIVEN!

With regard to the downed helicopter by the Azerbaijani Armed Forces, Minister Ohanyan told reporters that an internal investigation has been completed, the command has taken appropriate decisions, a criminal case has been instituted.
– Not everything we can inform our society. Disproportionate response was given definitely, some clarifications were given to the society. We investigate our enemy’s sites, we see information about losses, – said the Minister.