FROM GERMANY – TO THE FRONTLINE

“I came to defend the border”, – says Albert Rezyan who serves on the frontline. 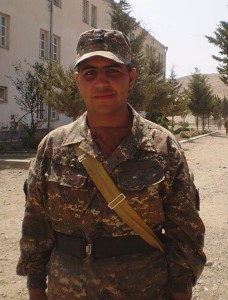 – It is already 6 years that we live in Germany, in Hannover. We have a small barber-shop, we got used to the life there. My sister and mother already have citizenship of Germany. I would have also got it if I graduated from high school and stayed there, but I decided to come and serve in Armenia. I have a residence permit, but do not even think to use it.

I am doing my duty… My homeland is Armenia, I had to come. I live far away from Armenia, but that does not mean that I have abandoned the motherland. I will serve with dignity, I made a vow.

During the oath all the guys were so excited, cleaned shoes, uniforms, were waiting for their parents, brothers, sisters. I looked, and excitement squeezed my throat, there was neither my mother, nor sister… Although my relatives have not forgotten me, but I’d really like my mother and sister were present at the oath ceremony.

I already have people close by to me, ready to help, to give advice. For example, my company commander Captain Arthur Grigoryan. He encourages every my very small success, which is very important for me. Until now I have not seen from him nothing wrong or heard any bad word, he’s a good man, a real soldier, knows how to respect the other, to love, he is not only demanding … if you do the job, he is inspiring …

Tomorrow for the first time I will go up to combat post, that’s why I’m very inspired. After all, come to serve and not go up on a position? And then what’s the point?

The backbone of our army is a soldier who is on positions. I told my friends: if suddenly as a result of the draw I get on urban military unit, I’ll ask to send me to the front line. There were people who did not understand me, saying, “What, are you crazy?” And I said, “Yes, I’m crazy, and will defend the Fatherland on the border!”