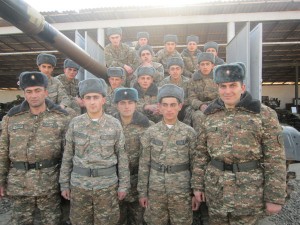 During Artsakh war the desire of the Armenian fighters was to have armoured vehicles in necessary quantity. The only source to acquire them was the enemy’s army. Armenians either confiscated vehicles or shot them, afterwards fixed them and used.

And now, 20 years after the war the armoured troops are the most powerful arms in the Army of Defense of Nagorno-Karabakh Republic.

One of the regiments which holds the name of armoured troops Marshall Hamazasp Babajanyan, in 2012 was recognized as the best AoD regiment. The last 7 years it functions under the command of Colonel Zhirayr Poghosyan.