“WE HAVE NOT GIVEN OUR LAST BLOW YET …” 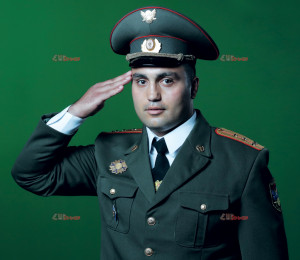 The platoon commander, Captain Margar Saribekyan, was recently awarded the “Combat Cross” Order of the 1st degree. He was only 25 years old during the last war in Artsakh, but took a detachment in March. The position defended by him was attacked with all the weapons in the arsenal of Azerbaijan from the first day to the last day of the war, but under the command of Margar Saribekyan, the unit did not give up an inch of land to the enemy, causing heavy human and weapons losses. There are horrific videos in his personal archive, which clearly show how the Azeris who approached the position defended by Margar Saribekyan filled the way back with the lifeless bodies of their soldiers and officers. Azeris have made up mythical stories about the 25-year-old commander. For example, on one of the Azeri TV channels, Margar Saribekyan was introduced as an Arab mercenary who, in the words of the enemy, brutally massacred the Azeri soldiers. Margar’s courage and commanding talent was appreciated by the Azeri colonel who came to remove the bodies of his fallen soldiers from our land, who told our officer in the presence of the army. “It was impossible for you to win …” 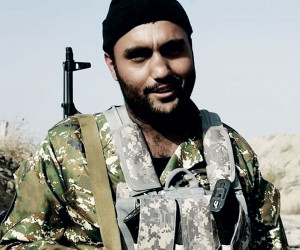 During the war, Margar Saribekyan’s nickname was forgotten. The chief of staff named him Leo. Captain Margar Saribekyan and his unit won all the battles with minimal losses – three casualties, while the number of destroyed enemy armor and corpses left on our soil was in the hundreds.

– I am a good commander and I was able to turn the platoon I lead into a fighting army.

– How? – This is the question I start the conversation with the hero commander.

– I have to start from a little distance. I did not join the military due to circumstances or coincidence. For as long as I can remember, I dreamed of a military uniform. The movies I watched as a child, the books I read were about army life, soldiers, wars. My mother also loved the military, she wanted me to wear a uniform. I first heard the word patriotism from him, he awakened my love for Armenian history, which was especially evident during my school years, when I was passionately studying the life and heroism of Armenian generals. 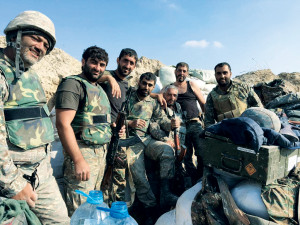 I have passed the classic way of the military. First, Tigran Mets Military School, then Vazgen Sargsyan Military Institute, with a great desire, effort and determination to become a good commander.

– And why did you choose the military profession?

– I like to be brave. Straight, smooth roads do not inspire me. I like to walk on the edge of the abyss, listen to my heartbeat, face danger. And win. This is no longer a hobby, I do not know any other way to live. I have to feel strong every day, every moment.

My first military post was platoon commander. The military university gives you military knowledge, theoretical insights about the army, interpersonal relations, the service of the commander, but from the very first day of taking office you understand that at every step during the service you have to make decisions that have nothing to do with theoretical knowledge taking into account the nuances of human relations and the psychological characteristics of a person.

– Did you know that a war will start in a year?

– No, I did not know, but the army is for fighting, every army. In addition, Azerbaijan’s harsh, belligerent rhetoric, growing armaments, territorial ambitions have suggested that we will not avoid war.

– What kind of commander were you in peace, what kind of war did you have?

– I am a strict, demanding, uncompromising commander. At the same time, I know the “service problems” of each of my soldiers, the worries that are outside the army. And I have taken on the task of solving those problems, taking care of them, because the military staff is a family, the commander is the father of that family.

A 25-year-old father of a large family, especially when he is almost the same age as his children, the soldiers.

– It is difficult, but it is my choice. I persuaded my soldiers that I was ready to give my life for each of them, and they responded with the same devotion. We unanimously, without hesitation, merged with the idea of ​​defending the homeland, wholeheartedly, selflessly, heroically. We managed to become an army. These are not just nice words.

– What did the army say?

– Dedicated to the idea of ​​defending the homeland, believing in the same values, preferring the life of a comrade-in-arms to his own life, brave, having the best knowledge of his military profession, psychologist A group of militants ready for the fiercest battle. My soldiers put down one weapon and took the other according to the situation.

– I watched a video about your squad, they said that the enemy outnumbered you ten times with “human resources” and weapons. And thanks to your high command knowledge, you have kept the position with minimal losses.

– I was not afraid of being killed, I was just afraid that I would lose a soldier due to a wrong order. I would not be forgiven for the rest of my life. You know, sometimes in a mixed situation you can make mistakes when you don’t have time to think long and hard.

– Can you tell us about the most difficult battle?

– The enemy immediately launched a fierce attack. Martakert was constantly bombed. As we climbed, we had to get out of the car several times and hide until the fire subsided so that we could continue on our way. After the first victory, something incredible happened. Every soldier of mine, without exception, became a lion.

– In fact, besides you, your soldiers were also lions.

– From the first day of the war until the last day, every day the enemy attacked us with different strength. He hit with all the weapons he had, even Smerch, but my boys did not jump. The enemy was ten times greater than us in manpower and military equipment, but the enemy’s losses were a hundred times greater. We had 30 soldiers in the position, and from time to time we were joined by volunteers. The enemy was throwing 200-300 soldiers at us during each attack, helicopters, tanks, artillery was working non-stop…. When the heavy weapons were silent, we understood that the rear guard would enter the battle. After all the attacks, the Turks escaped, leaving many corpses.

– Has there been a close fight?

– Yes, the Turks were in front of our eyes, 10-20 meters away. They even threw grenades at us. The hardest part of Martakert was ours. On November 4, junior sergeant Arthur Veranyan was killed in a shootout. On October 21, I lost one soldier and one officer. Senior Lieutenant Arman Beknazaryan and Junior Sergeant Karen Yesayan fell bravely in the battle.

The position was in a place that could not be reached by car. We took the dead and wounded to the doctors, bringing food and ammunition from there.

The doctors did their best to provide proper medical care to the wounded, to keep them healthy at the highest level. There has never been a time when we needed ammunition. During the march, our fire did not stop for a second, because we always had extra charged machine guns. There has never been a case when my soldier was starving in position.

Boys from the “Arabo” detachment, “Eagle-30” and other detachments were fighting with us. There were many dedicated warriors among them who blocked the way of the Turks without sparing their lives.

– Is it true that your father and brother also took part in this war?

-Yes! My brother Norayr Saribekyan is serving in the peacekeeping forces. They were on a mission in Kosovo when the war broke out. Our military group asked the command to give it a chance to take part in the war, to defend the homeland. The boys returned to Armenia and left for the front. And my father, Hakob Saribekyan, works in a military unit. He was also in Artsakh during the war.

– How many of the 30 soldiers defending your position were wounded?

– At the end of the war I had only 7 soldiers who were not wounded. This does not mean that all the wounded did not continue the fight and went home. Those who were able to take up arms returned to their positions after treatment, some even refused maternal care and came to the front. This, if you will, is a greater achievement than keeping the position invincible.

– I have many shrapnel wounds, but I have never come down from position.

– I have heard the opinion that the spirit of a soldier is not important in modern wars. They said you can’t hurt “Bayraktar” with your spirit.

– Nonsense. The war is won first of all by the brave and dedicated soldier. And the words of the Azeri colonel who came to take his soldiers out of our territory, that it was impossible for you to defeat, referred to the spirit, courage and patriotism of our soldiers, because we were weaker than the enemy with our weapons.

– I know that you led the battle, that your merit is very great, that you inspired your soldiers with strength and spirit, showed an example of courage, optimism and victory, but you constantly praise your soldiers…

– The greatest achievement of the commander is not his heroism, but the ability to make the army heroic. We fought and sang. We muffled the sound of gunfire with a song. Have you seen in the movies? It is the psychological moment when you are literally ready to die for your land, without a drop of doubt, without regret. When you are completely free of fear. When you feel like a superman. It happened, we observed. Exactly 20 minutes the enemy army came at us. But this great difference of power did not suppress him to my army.

– How many people did the army coming in twenty minutes include?

-200 to 300. After the first victim, the boys shook for a moment. But it was short-lived. I spoke incessantly, urging the pain to become revenge, not weakness.

– And why did the Turks think that you were an Arab mercenary? They showed your picture on their TV channels and said that an Arab mercenary fighting by the Armenians was destroying the Azerbaijani soldiers.

– I do not know. Maybe they wanted to convince their soldiers that I am an Arab, not an Armenian, because courage and momentum are not specific to the Armenian army.

– Mr. Captain, I do not know what words to end this conversation … During the war I talked non-stop with soldiers, officers and volunteers… And I came to the conclusion that our defeat was temporary. This unparalleled strength, heroism, patriotism is a weapon hanging on the wall that will one day fire, a terrible mine under the feet of the enemy who has occupied our lands.

– If you know this, so does the enemy, who has felt that power on his skin.

And we have not given our last blow yet…