I met Shant in Febraury 2019 at the Central Gathering Facility while covering the conscription. He was born and raised in the United States, and when the time came, the decision was irrevocable: he will come to serve in the Homeland. The simple, modest, direct, Persian-speaking young Armenian did not look different from the other boys who came to the team. At the same time, his perseverance and love for the Homeland were so great and sincere that I immediately remembered his image with care. At that time we were just overcoming the pain of the April war and we still did not know what new challenges we would face in about a year…

Shant’s parents are Persian-Armenians. Their ancestors were deported to Persia by the Seljuk Turks and lived far from their homeland for 300 years. Then Shant’s family settled in the United States, but again lived with a longing for the Homeland. That longing, unfortunately, was the reason why Armenian and Armenian were always kept alive in their family, abroad. “I did not attend an Armenian school, but my father, with his stories about Armenia, his lessons in the Armenian language and culture, played the role of a real Armenian school for me. When I grew up, I was always interested, read and learned about Armenia. The 2016 war, of course, turned our attention back to the Homeland, but that was not the reason for my decision. I had decided at an early age that I would come. Armenia is my Homeland. It is difficult to explain that attraction in words… Throughout my conscious life I have always been convinced that an Armenian should live in Armenia.

The most important thing for me is that Armenians all over the world have a homeland and do not assimilate. An Armenian living abroad cannot remain an Armenian, I have seen and felt it. “Here in Armenia, as in any other country, there are various problems, but the Armenian must solve the problems of his country, not the foreign one.” This is how Shant explained his repatriation two years ago when he left for service. As a precondition for coming to the service, the father set the young man to graduate from the university and get a profession, which he did and came with honor. Shant had served in Artsakh.

. How happy I was when I heard Shant’s voice, I learned that he had gone through the war with honor and lives and works in the Homeland with the same love and devotion. He is the same Shant, to whose face I know only the “fidayu” mustache has been added.

“It is a feeling when you get the certificate of citizenship of your homeland, it is a completely different feeling when you stand on the border of your homeland, you take the responsibility to protect it,” Shant remembers his first feelings of service. to say with pride that he is defending his country, his home հարկե Of course, you feel stronger, more confident and aware of the seriousness of your responsibility. Sometimes I would hear from the boys, “I am protecting my home, my family.” No, we are all the Homeland, we are all the family, and there is no family between you and me. I really want us to understand this. We have a Republic, it is the family of all of us. We are a nation-army and we have a state. There are thousands of nations and nationalities in this world. How many can say that they are indigenous and have a state? This is not only an honor, it is also a great responsibility… 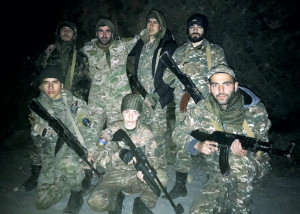 Frankly, I was looking forward to this war. I always told the guys. “Like the April war, it is very possible that it will happen today.”

After some time, due to an unexpected health problem, Shant had to be demobilized.

“I was so offended that I was demobilized,” Shant now remembers with a smile. “But of course my demobilization did not end my service.” I immediately joined one of the military training organizations and continued my training.

Shant’s premonition became a reality. Shortly afterwards, the 44-day war began, this time as a volunteer to the detachment leaving for the front, Shant again left for the front line of Artsakh.

– On the morning of September 27, I felt that my phone was constantly ringing. I looked and saw that everyone was writing anxiously, “War has started, they are bombing Stepanakert.” Without thinking, I took my military backpack, which is always ready behind the door, and called a car. I was fully prepared mentally and physically.

– Did you feel that you need it? Didn’t you think that the fighter will fight, what should I do?

“I am the army,” he says so naturally and sincerely.

With military precision and secrecy now, months after the 44-day war, it does not tell much about those days. The most interesting and unusual contrast on the battlefield was the absurd contrast for him.

“You would see planes and ATS hitting, bombing from all sides, and suddenly there was silence.” We had strong commanders, military experts. We strictly followed the safety rules. It was because of that organization that we had very few casualties. We all left voluntarily and there was no fear in us. We understood whyhe was there, what was our problem? My father was already in Armenia when the war started. I called several times a week and was informed that he was fine, that nothing else was distracting me from the fighting, my daily service duties.

– What is the Homeland for you?

– As if you ask the fish. “What is water to you?” I am a part of the homeland. When you sing Armenian songs, when you walk barefoot on the grass, when you feel that every stone and grass is close to you, you identify with it all. I want to emphasize again. There are now very few people in the world who can say, “I am a native of this land.” It is true that my grandparents did not live in their homeland for 300 years, they were immigrants in a foreign country, but even today I feel that this gene is preserved in me. I really believe that my blood drew me here. Whatever it is, I know that gene would one day bring me to Armenia.

The war has stopped, but it is not over. This is the position of Shant and’s supporters, other members of the “Statehood as a Supreme Value” organization. Every night, after work, Shant and his friends, many of whom fought shoulder to shoulder in the 44-day war, rush to train to maintain and improve their fighting skills. They take the training weapons and start the 3-hour combat training.

– My service is not over and I do not think it will end. It is a human problem. The struggle for existence, and there is always danger, վտանգ you must always be ready to defend what is dear to you. And that means always being ready for any development. And it’s not just about physical fitness. We must be ready in every way – “psychological”, “informational”, even with movies, with cartoons, a war can be waged against us. These are all new generation wars that we need to be aware of. And patriotism is the weapon due to which there are solutions in all cases, means of struggle. This is what we have to fight on all these fronts.

When leaving for the army, Shant was sure that one day his parents would return to the Homeland. Today it has already become a partial reality. The father is in Armenia. He says his mother and sister will also come. When I ask, isn’t it difficult to make a decision to leave a prosperous life, Shant contradicts.

– A so-called prosperous life is very relative. It has its difficulties everywhere. And you can never know what serious problems might arise in another country. This is how I can explain our return. “Outside”, it is as if you are a person who goes from one hotel to another, convinces him that he will always stay in the hotel, that is his place, and, behold, you return to your house…. It will be demolished or a palace, it is your house, it is close to you. Finally you feel at home եմ I remember when I was walking the streets of Yerevan for the first week of my life and I looked around, I saw that everyone was Armenian, I had a feeling that I was all that myself. It is true that I grew up in Glendale, where there are many Armenians, but it is a completely different feeling when you are in Armenia. It is as if there was a crack in your heart, and here it is filling… It seems to me that all Diaspora Armenians have the feeling of that empty part of the soul, that you will not fill with anything else.

I love traveling through Armenia and Artsakh. I’m surprised that many do not have that aspiration. Our gene is designed to live in the mountains. I used to go on many campaigns before the service, and now. And you train, walking through mountains and canyons, ես You know your homeland. You need to know to understand what you are defending. Recently we went to Stepanakert as a group. There were people with us who had not been there before and were making noise, but when we got there, they were surprised. “What a beautiful city this is!” Recently, we took a group of people to Goris through one of the IT programs. “How beautiful Syunik is,” they were surprised. Well, see to love…

Monte said a good thing. He said, “We do not need to eat well, we do not need to drink well. “Let’s solve the Artsakh issue before we can think of other things.” I will add only one thing to his words. “Forget that eating and drinking. it will never give you complete pleasure. We will not rest until we have a strong state and others are not afraid of being attacked. Every Armenian must keep his republic, because we have no other choice. If you want to proudly say that I am Armenian, then you must defend your state. Armenians will not continue otherwise. It brought us luck. We have a state, a national army. If you consider yourself an Armenian, you must serve the Republic of Armenia and the Republic of Artsakh. You can not escape anywhere else and live in peace. The inner struggle will always wear you down. Therefore, let everyone think that there is no Homeland without his participation! There is no Homeland without me…