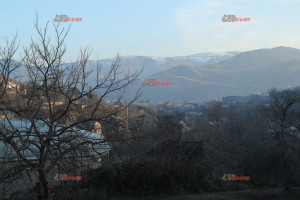 Every generation of Armenians has its share of war, even wars…

In order to keep your place, type, your existence on the constantly fragmenting and ever-changing map of the world …

Tavush freedom fighter Khachik Sazbandyan took part in the inter-ethnic battles of the 90s with his brother Hamlet, who was the commander of the village self-defense detachment. Years later, Khachik’s sons, Davit and Vanik, would take up arms and stand on the again endangered borders of their homeland.

David and Vanik proudly talk about the military path of their father, uncle, they remember a thousand cases and episodes from those days, they remember how meticulously they cleaned and polished their weapons when they came down from the shift.

His father’s comrades-in-arms often gathered in their house and enthusiastically told about the war and the heroism of the freedom fighters, and perhaps it was this spontaneity and spontaneous devotion that led the boys to choose the profession of Defender of the Fatherland.

The eldest of the sons, David, studied at the Artillery Faculty of the Vazgen Sargsyan Military University, after graduating he was appointed platoon commander, served in various parts of the front line, from platoon commander to division commander, lieutenant colonel.

His younger brother, Vanik, after his demobilization from the army, decided to continue his service in the Armed Forces, following the example of his older brother, who is a contract sergeant. During the July 2020 events, when Tavush was targeted, he was on the front line for months. 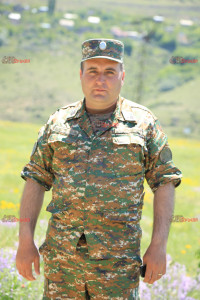 “Our land, which is the size of a fist, is constantly being torn apart. It is the same enemy that provokes wars from time to time. Sazbandyan said.

The lieutenant colonel is a participant in the 44-day war, he also took part in the April hostilities, he was awarded the “Medal of Courage”.

– This last war was not like 2016. During the four-day war, it clearly differed in its scale and intensity of fighting. The forces were incomparably unequal. Our army was fighting against an enemy that had received considerable military support from several countries.

The enemy targeted not only the Armenian positions, but also the settlements with missiles and artillery. During the war, David’s family was in Artsakh, in Martuni.

– The city was being heavily bombed, I was at the forefront at that moment, I was giving orders to the staff to do a task, at the same time, at the same time, I was contacting my brother to come and get my family out of the fire, just two months ago during the July confrontation. , I was moving my brother and sisters’ children from Tavush to a relatively safe place …

– Now it is the period of final exams in the military unit. Considerable work has been done so that the artillerymen have a perfect mastery of all the professional nuances, so that they can more confidently perform individual tasks, fight independently. The cadets know for sure that there are no details in the military. a seemingly insignificant mistake can be decisive on the battlefield, ցանկացած any mistake of the artilleryman, a shortcoming can directly affect the outcome. On the battlefield, many artillerymen stood out for their courage, many of them even took firing positions with their artillery alone … 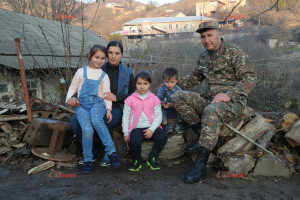 The Sazbandyans, both father and son, continue their patriotic service today. Following the example of their fathers and grandfathers, their children decided to follow the military path.

“Our children, like us, grew up under fire, they heard gunshots more often than lullabies … And now, when there is a shooting, they make the wrong decision: this is a machine gun, this is DSHK, Peka,” says Sergeant Vanik Sazbandyan.

Vanik has two daughters and a son. His son, four-year-old Hayk, will become a soldier to stand by his father, and Vanik’s youngest daughter, six-year-old Anna, also dreams of becoming a soldier. On New Year’s Eve, like girls of his age, he did not ask Santa Claus for a doll and shiny jewelry, but a gun …