HAYK KOTANJIAN: THE NATIONAL DEFENSE RESEARCH UNIVERSITY’S GEOSTRATEGIC PROJECT ON THE EVE OF THE AGREEMENT WITH THE EUROPEAN UNION 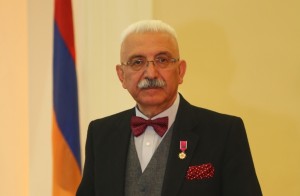 In July 2017 facing the conclusion of Armenia’s agreement with the European Union, the National Defense Research University, MOD, RA, embarked on the elaboration of the geostrategic initiative of the RA’s integration into China’s “One Belt, One Road” (OBOR) project. It is targeted at the assessment of the possibility of launching a new alternative China-Europe route in the context of the OBOR initiative, by integrating the China-Iran sea transit into the “Persian Gulf-Black Sea” multimodal transport corridor.

The given elaboration was previously discussed in July 2017, during the visit of the delegation headed by MG Chan Inli, former Head of the School of Defense Studies of China’s National Defense University, to our University. The project was reviewed with the Chinese side by Azat Davtyan, NDRU Research-Fellow, on 20-28,  July, at the international strategic conferences in Xian and Shanghai.

In order to review the outcomes of the meetings with the Chinese strategic analysts with the Iranian side, with the support of the RA Ministry of Foreign Affairs and the RA Embassy in Iran, Benyamin Poghosyan, my Deputy Head on Research—Head, Institute for National Strategic Studies, and Azat Davtyan, Research-Fellow, took a mission trip to Tehran. On 24 October of this year they attended the international conference “Central Asia and Caucasus”, hosted by the Institute of Political and International Studies of Iran’s Ministry of Foreign Affairs.

During the expert discussions of our joint elaboration in July-November, 2017, Chinese and Iranian specialists have underscored this project designed by the prime RA state think-tank. This very strategic integration project was delivered to the Central Military Commission of the People’s Republic of China. Iranian specialists in particular have highlighted Iran’s interest in providing for the transit route to Europe across Armenia’s territory. The NDRU-developed project is to endow Armenia’s geopolitical role in the region with a new strategic caliber, and raise to a qualitatively new level the European Union’s bilateral and multilateral cooperation with Iran and China with participation of Armenia.

Meanwhile, I believe, it is necessary to mention that the further delay of the launch of the interstate discussions on this matter with Iran and China may essentially reduce the possibility of implementing the given program targeted at surmounting Armenia’s strategic isolation.