IT IS A WAR CRIME 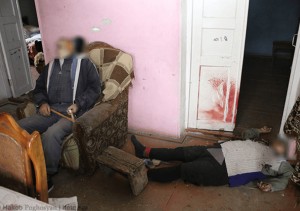 During the four-day Artsakh war, the Azerbaijani armed forces carried out a series of actions that qualify as a war crime under international humanitarian law. And now the authorities of the Republic of Armenia and NKR, cooperating with international organizations, are collecting evidence of committed crimes on the basis of which criminal proceedings are starting.

In the actions of Azerbaijanis there are elements of war crimes against the military of the Army of Defense and civilians. The soldiers were tortured, beheaded, killing of civilians was carried out, corpses were dishonored, the victims’ bodies were photographed and shown on the Internet, in order to intimidate the Armenian side.

Military and political leadership of RA and NKR declared that both the Azerbaijani authorities and the persons who committed war crimes must be brought to justice, in front of the international community, too.

On behalf of the families of members who were killed and then beheaded, dismembered on the night of April 2 as a result of violation of ceasefire regime by Azerbaijan, a group of human rights lawyers submitted a complaint to the European Court of Human Rights, demanding recognition of inhuman treatment to the victims, means of their legal protection, violations of the rights to non-discrimination on ethnic grounds.

A common complaint is already registered. New applications are expected to the relevant international structures.

The first part of the second article of the Geneva Convention states that the term “armed conflict” is used not only for a declared war, but also during all armed conflicts. This confirms that during the armed conflict norms of international humanitarian law must act everywhere and the perpetrators must be punished.