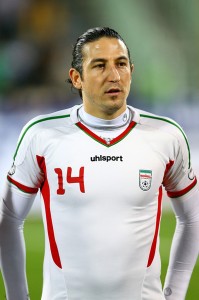 There is an Armenian footballer in the national football team of Iran – Andranik Teymouryan.

In the FIFA Table the Iranian team today occupies 37th place, in Asia – the 1st place.

Andranik Teymouryan was born in Tehran in 1983. His first football success he registered in the football club “Ararat” which was often compared with the Spanish club “Bilbao”. The team was also called “Orange” because the players used to wear orange uniforms.

Championship of Brazil is the second participation of the 31-year old Armenian footballer in the final of a World Championship. Besides “Ararat”, Andranik played also in the best Iranian team “Estehlale”, English clubs “Bolton” and “Fulham”.

In the national team of Iran Andranik Teymourian scored 8 goals.

He is listed the top 10 players of the Asian continent.