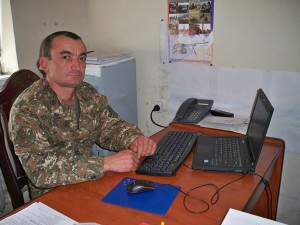 In 2013 positive tendencies were registered in the regiment under the command of Colonel Karen Arstamyan. As officer of the regiment on social and legal issues Captain Sevak Aghajanyan told, in 2013 an acute decrease in violations of service discipline was registered – 5 servicemen have been convicted, incidents with physical injuries were basically because of negligence, incidents of leaving the regiment without permit also decreased.

– From the standpoint of legal violations basically there were registered incidents of out of order attitude of warrants and officers towards soldiers. Regiment’s command gave appropriate legal move to those cases. During last year no case of such attitude was registered among soldiers. As a whole officer-soldier relations were on an appropriate level, – says Captain Aghajanyan.

– If law violation has no corpus delicti and if the soldier has not been noticed in such actions before, in the framework of the rule adequate conclusions are made and if necessary disciplinary punishment is being conducted.
Aghajanyan thinks that today the necessity occurs to review article 358 of Criminal Law, since it provides for imprisonment till 4 years in all cases of use of force.

– I think that the punishment provided by the article is very severe.