“ARMENIAN EAGLES” IN THE DEFENSE MINISTRY 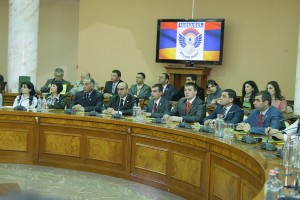 Executive members of patriotic NGO “Armenian Eagles” headed by their chairman Khachik Asiryan visited Defense Ministry of Armenia on February 5th. The aim of the visit was to generalize 4-year activities of the organization. During that period the NGO visited more than 500 communities, organized 550 functions, set up 300 branches, more than 32000 persons voluntarily joined the organization.

In the end of the meeting the Minister answered the questions of those present. Responsible for Meghri region Sarkis Hakobyan asked – is it possible exchange of territories in the context of Karabakh problem settlement?

“Armed forces of the country struggle and will fight for each inch of the soil. In case of aggression we’ll be guided with the principle – take the horrors of war to the territory of the enemy”, said minister Ohanyan.