THE BEST ASSESSMENT IS GIVEN BY THE RECOVERED SOLDIER

Lieutenant Vardan Harutyunyan is a military doctor. After graduating from the Faculty of Military Medicine of the Medical University, he left for service.

I had only served in Stepanakert for a few days when the war broke out. The dawn of September 27 opened with a thunderbolt for me.

When the second explosion occurred, a window opened due to a strong wave. I quickly contacted my commander, he said, a fight has started, come quickly. I got in my car and hurried to the military unit. “From that moment on, we set up an aid station in the military unit,” recalls Vardan. From the beginning to the end I had 980 wounded servicemen and I lived and fought with everyone …

Strange as it may sound, I experienced the most difficult moment while discharging a recovered soldier. Can you imagine an 18-year-old soldier crying and asking me to write him off so that he could go to war? He said, if you do not write me off, I will run away. The boys need me, my friends are waiting for me. 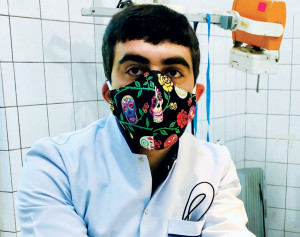 Since the war started, we have always thought that our lives are in danger, and we all had a self-defense reaction. We knew that we could be the next … The doctors fought alongside the hero and brave soldiers in the same spirit.

Inspired by the boys’ unbreakable spirit and courage, on November 7, the military doctor personally organized the evacuation of 60 wounded people from his medical center in Vardenis to Vardenis, being constantly under bombardment and shelling.

The doctor who went through the war claims. After looking into the eyes of death, you value life more and you appreciate every detail.

– And now that I am with my family, I consider it a miracle. I have survived God’s success and now I value life more, I try to live right.

Lieutenant Harutyunyan is currently continuing his professional activity as a military doctor in one of the military units of Artsakh. In the future, he plans to choose surgery as a specialty, and the best evaluation of his work is given by the recovered soldiers.

– When they call and inquire about me, it is the peak of happiness for me.