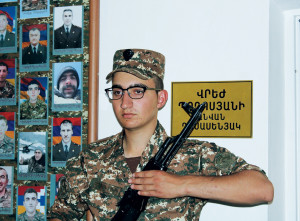 We were talking near the Shaki waterfall with the hero’s father, Seyran Poghosyan.

“As a child, Vrezh used to come here a lot to listen to Vorotan ‘s’ conversation,'” said the father, at whose invitation we were in Sisian. On July 1, Vrezh would have turned 29, but the last war was in 2020. He took the lives of thousands of Armenians in the fall … One of them was Vrezh.

Vrezh Poghosyan was born in 1992. He was born on July 1, in the village of Uyts, Sisian region. And in the secondary school of this village, a commemoration ceremony was held on the occasion of the hero’s birthday. Before that, the hero’s relatives, friends, school and military friends, officials visited the Sisian military pantheon, where many Sisian people who died defending the Armenian land during the Artsakh liberation war and in the following years found their last refuge. He is buried here – Vrezh next to the graves of his cousin’s military friend, Captain of the Armenian Army Arayik Safyan. They died together in 2020. on October 10, in Jrakan, where they had been since the first day of the war …

At the initiative of the hero’s friends, with the support of the director of the school Vladimir Ghazaryan, a class in the secondary school was completely renovated with the help of benefactors, henceforth it will be named after Vrezh Poghosyan.

Before the red ribbon was cut at the entrance to the classroom, a solemn ceremony took place. The anthem of the Republic of Armenia was played, a minute of silence took place … Then Maro Hakobyan, a teacher of Armenian language and literature, said the following in her speech.

– The naming is a little consolation for the hero’s parents and relatives. 2020 has taken away a whole bright generation from us, and today those immortals will smile in the corners of Glory, in the pure eyes of newborns. We must be strong to be able to withstand the great pain … We express our deep gratitude to the heroes and their parents.

The students of the school performed in front of the audience with their speeches, recitations, military patriotic songs and words of remembrance. They presented the biography of the hero. 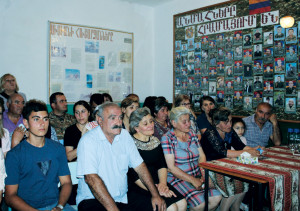 … 2000 Seyran Poghosyan’s family moved and settled in Saratak village of Kashatagh. 2009 After graduating from the village school, the future soldier entered the faculty of preliminary military and physical training of Artsakh State University. 2010 He was drafted into the army, served in the Jrakan military unit for 2 years, and was demobilized with the rank of senior sergeant. 2012 year. After demobilization he worked in the State Emergency Service of the Republic of Azerbaijan, received the rank of non-commissioned officer. For some time he served in the police, then at the Vazgen Sargsyan Military University as a platoon commander. But the homeland was calling, and he returned. He was a military science teacher at Ishkhanadzor secondary school.

2019 According to the contract, he again served in the Noravan military unit of Syunik region. In parallel with the service, V. received a six-month education. He received the rank of lieutenant at the Sargsyan Military University. Participated in 2016 During the April war, he was awarded the “Combat Service” medal. He was a sniper in the military unit, he knew his profession very well. 2020 On September 27, Jrakan …

Friends of the servant remember Vrezh’s call: “There should be no one going with us, whoever goes back, shame …”. On October 10, Vrezh was killed by an enemy grenade launcher.

… In his speech, Vrezh’s sister Arandik thanked for keeping his brother’s memory alive. He and his younger brother, Monte, were then taken to a classroom named after the hero input tape. There is a sign at the entrance to the classroom, next to it there is a corner of Glory entitled “Immortals Command”, dedicated to all the heroes of Sisian who died in the 44-day war. And in the classroom there is a photo of the hero, things telling about him, documents … Here too the soldiers of the same military unit were guard of honor: Knyaz Khlghatyan from Vedi, Hakob Yeritsyan from Artik, Narek Sargsyan from Aparan. Their commanders Captains Artyom Avetisyan and Gorg Martirosyan mentioned that even in peacetime, during his service, Vrezh was distinguished by his great dedication, discipline and exemplary behavior. Among those present were Vrezh’s classmates Ashot Arakelyan, Harut Tadosyan and Artush Karapetyan, through whose efforts the named classroom was renovated.

– We worked with great love. “It owed a lot to the soul,” said the boys.