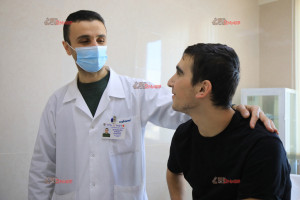 Many of our best military doctors were on the battlefield during the 44-day war. They undertook their duties without hesitation, faithful to the oath of Hippocrates. They went through many trials and tribulations, did their best and impossible to save the lives and health of the wounded fighters. They worked tirelessly, often performing major surgeries 24 hours a day. They still perform their duties as military doctors in the Armenian army. Let’s get acquainted with two of them.

Senior resident of the Traumatology Department, Maj.  Mikael Maghakelyan was born with the Artsakh Movement in 1988, in Stepanakert. From an early age he saw war, destruction and the dedicated work of his medical parents during the war. Traumatologist’s father, Alexey Maghakelyan, is one of the founders of military medicine in Artsakh. He was awarded the Combat Cross Order of the 1st degree and the title of Honored Doctor of Artsakh.

Mikael Maghakelyan’s mother was an epidemiologist during the war. Among his responsibilities, Mikael especially remembers the daily inspections of the water coming from Shushi. “The enemy was shelling Stepanakert from Shushi. Besides, there was a danger of poisoning the water. We were growing up in basements with our children. Memories of the war became the reason for the professional choice of many children of our generation. Only six people from our class in 1995 were admitted to the newly opened military medical faculty.

After graduating, Mikael Maghakelyan joined the service. Then he graduated from the Leningrad Higher Military Academy. He has been serving in the Central Clinical Military Hospital of Yerevan for 10 years. During that time, when there was border tension at the place of birth, he left for Artsakh. 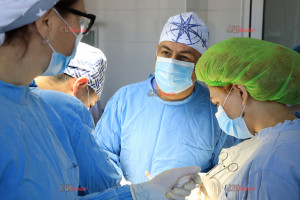 In 2020, Mikael Maghakelyan was in Stepanakert on September 27, recovering from a coronavirus. The parents were also ill. On September 26, the father was discharged from the hospital, and on September 27, the war began. After moving his parents to Yerevan at dawn on the 29th, he left for Ishkhanadzor, one of the most difficult destinations. On October 6, he replaced Vladimir Seyranyan, another traumatologist who had been performing his professional duties there. Mikael carried out his mission until October 18, when they had to move the mobile hospital to Kovsakan.

“In the first days the weather was gloomy, cloudy. Drones could not operate in that weather. Then the sky cleared … And once another drones, which was flying in our direction, fell 50 meters away from us, on a “Sadko” car, the whole crew of 18 people were killed on the spot…

The drones were constantly flying over our hospital. The danger was great, our leader, Daniel Maratich, decided to reduce the number of medical staff. There were six of us left: two nurses, two pain relief doctors, a traumatologist and a surgeon. But the flow of wounded was increasing day by day, and soon the medical staff was replenished. We worked with surgeon Hayk Hovhannisyan, we performed parallel surgeries, a wonderful team work.

Wounded people were brought, who in peacetime could not be rescued even in specialized medical institutions. But sometimes the situation forces us to do the impossible.

… Ural was coming full. According to the severity, we were “classifying” the wounded. We needed to stabilize the situation and send them to the Goris hospital. Despite the terrible burden, the losses were rare only in cases when the wounded had already lost a lot of blood before reaching us…

The most complicated operation was on a wounded soldier who had two legs and one arm amputated. One leg had an open fracture in the thigh. I called the head of our department Leon Zhamkochyan and said. “I am sure we can save this leg, but we do not have the opportunity to operate normally here.” He said. “You put plaster, send him to us. We will do everything to save the leg.” We performed primary surgical treatment of the wounds, sewed the pulse and sent it to Yerevan by helicopter.

When I returned to Yerevan, I saw that soldier. We were able to save the legs by amputating the middle lower part of the calves. Now, since the movement in the knee joints is normal, he will wear prosthesis on both legs, he will walk. Of course, he did not know me. Many of the wounded did not see us face to face. I saw, I was surprised. The fighting spirit high, cheerful. He told me. “Doctor, I want to introduce you to my parents, let them know who owes me to get me out of that terrible hell, to save my feet.”

… There were injuries of various kinds, from burns to injuries to the face, chest, upper and lower limbs.

The whole medical staff helped us a lot being extremely cohesive and organized. The nurses, the doctors, the nurses, the other specialists, we all worked equally and without rest. There was no day or night for surgeries. The wounded were brought every twenty minutes. There was a time when we stopped the blood of the wounded man with a string in the car, until we finished another operation and passed to his. Sometimes there was no room in the hospital, we operated on the wounded man in the car. At dawn we could sometimes stop for a moment, drink tea, put a piece of bread in my mouth ենք We did our best to send the wounded to their homes… Now there are so many wounded in the hospital, everyone has gone to our ward. ”

Dr. Maghakelyan’s parents are currently working at the Stepanakert Republican Hospital. Michael’s wife, sister, sister’s husband are also doctors. The doctor has three sons, 11, 7 and 2 years old. They were not told where Dad was during the war. “I did not want to disturb the family. I didn’t even tell my parents. Only my wife knew.”

Mikael’s boys are already talking about becoming a doctor. But Mikael does not want to see all three in white robes. maybe just to continue the name of the doctors’ family.

At the end of our conversation, the doctor said. “It was a war եմ I left knowing full well where I was going. I did not even think for a second about the necessity and dangers of going.”

In 2017, three Armenian doctors rushed to replace Aurora World Humanitarian Award winner Tom Katina, a well-known American doctor, for attending the ceremony at a hospital in Sudan’s Nuba Mountains. Among them was Hayk Hovhannisyan, senior resident of the General Surgery Department of the Central Clinical Military Hospital, a major of the medical service. A mission that our doctors performed excellently.

This is not the first case in Hayk Hovhannisyan ‘s professional life, before that he participated in two peacekeeping missions in Afghanistan.

And during the 44-day war, the surgeon who went to the front line in the medical detachment saved lives day and night without stopping.

“When I was in Afghanistan,” Hayk Hovhannisyan recalls, “we provided medical care to the wounded among coalition forces and Afghans.” And this war was ours, they were my relatives, and the events were extremely painful and hard…

On October 5, I went to Khndzoresk, and in the evening we left for Ishkhanadzor. I was going to be the head of the surgical team. Surgeon Hambardzum Kenderyan, traumatologist Mikael Maghakelyan, our operating room nurses and two anesthesiologists were in the group. It was a great fortune that the nurses of the operating room that went through the Artsakh war, Geghetsik and Marine, were with me. They said, “Where you are, there we are, doctor.” When we arrived, several people were staying in Ishkhanadzor in difficult conditions and working. Doctor Mikael Samsonyan was on duty in the operating room. He had been there since the beginning of the war, on September 29. It was a very cruel week… As soon as we arrived in Ishkhanadzor, the wounded were brought in a big car. We immediately got to work. There was no rest for a second. We performed parallel surgeries with our traumatologist Mikael Maghakelyan and surgeon Mikael Samsonyan. In the evening of the same day, we said goodbye to surgeon Mikael Samsonyan from Ishkhanadzor. Then other medical groups started joining us from Berd and Vanadzor.

There were 110-130 wounded in one day. The workload was great. They brought atypical lung resections, chest surgeries, wounds with many other problems, which were not my profession, it was a narrow profession, but we had to do it. Thank God, everything necessary has been done. There have been many, many difficult moments, sometimes incompatible with life… I can not forget those events …

Of the more than a thousand wounded who were taken to hospital alive, only three could not be rescued. Our small medical team has done a tremendous, excellent job. The most important thing was the training, experience and dedication of our commander that came after the establishment of the Mobile Field Hospital. The result of our constant exercises, the exercises conducted according to NATO standards, was achieved in the conditions of real combat operations.

What we saw during this war was only seen in the movies. I love to validate everything by shooting, but this time I did not have a second to think about it…

Now I live in my mind… In the soil, in the mud, from the bodies covered with a layer of blood, how could we cut off the clothes? In a short period of time we did all the necessary operations with great speed, managed to completely clean, disinfect the operating table, prepare for the new wounded… I had slippers with me, but the most comfortable were my German boots left over from Afghanistan. At some point I had an insurmountable desire to take them out…

General surgery is my specialty, mainly abdominal surgeries. But I was especially impressed by the war when I had to have other surgeries. For example, nephrectomy. I am not a urologist, I have never had a nephrectomy in my life, but I had to. His kidney was damaged, he was bleeding, if I did not remove him quickly, we would have lost the wounded man.

Just today a patient searched and found me. He knew I had surgery there on the thirteenth of the month. He was saying. “Doctor, wherever I go, they say, ‘This is a well-done operation.’ I have also successfully performed lung surgeries.

There have been serious realignments in our values ​​since the missions in Afghanistan, in Nuba in Africa, and after this war. You begin to appreciate everything you have in life in a completely different way when you know how life can change in a matter of seconds. Real values ​​are becoming stronger … My cousins ​​are still missing…

We also had wounded people injured by white phosphorus and multiple shrapnel wounds. These are all prohibited weapons, but the fact is that they were used in this war and caused terrible damage.

… Military medical service continued uninterrupted throughout the war. Due to the professional and organized teamwork, the medical service was trained in the most difficult conditions. We have gone through such trials that we now have enormous experience of balanced, effective work. And we are always ready … ”