WE HAVE REVENGE TO TAKE… 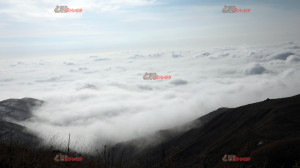 We are in the southern border zone, in the unit under Col G. Poghosyan, whose personnel is on combat duty in a responsible, complex position. We are going to the positions in a the military “Vilis”. It is not easy to serve in this mountainous, isolated area, but the defenders of the homeland are fulfilling their mission with honor, many of them are involved in hostilities in the heat of battle.

“Aghavnadzor has produced many graduates of the military institute,” the major does not hide his pride.

During the war, Alik fought in one of the hottest areas, Jrakan (Jabrail). During the heavy shelling, the cover was destroyed and remained under the ground. The soldiers thought that the head of their headquarters had died … Only the legs appeared from under the thick layer of soil; they pulled them out and, to their surprise, he was alive.

His friends tell different stories about Alik’s heroic deeds, he does not like to talk about it, he says we have done our job. 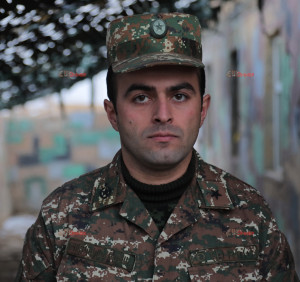 … The enemy was constantly harassing the swampy forest with grenade launchers. He decided that he must find out the source of the fire. He moved secretly between the densely grown reeds. There was a building in that area, the lair of terrorists. Shortly afterwards, they fired their artillery in that direction. Shouting “Allah Akbar” from the building, some fled headlong …

The firing did not stop, the drones were in the air, and a large number of the enemy were approaching from below. The forces were unequal, he asked the commander for help by force.

Then the communication was interrupted … Early in the morning only the auxiliary forces managed to approach somehow, they were frozen in surprise, the position was standing, and only the boys knew what a hot fight was going on at night, how fierce …

The battalion commander could not hide his joy.

“Are you alive? I thought you were dead.”

“I thought I was dead too,” Alik did not lose his humor.

…The enemy used its entire arsenal. 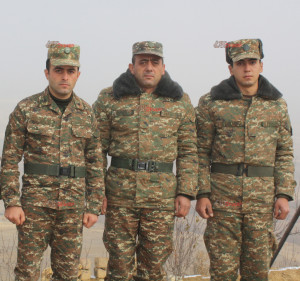 The boys fought with selfless devotion, they fought to support each other, to value each other’s lives more than their own. The wounded and the dead were taken out from under the unquenchable torrent of fire. One of the platoon commanders was severely wounded, and Alik was dragged and crawled out of the fire.

“Death is inevitable in war, but I can’t accept this reality, ” says Alik. “We have lost land, weapons and ammunition … We’ll get them back one day, some time, for sure. But human losses are irreversible … One has lost a brother, another has lost a son, a father and a son have died side by side … The boys who love life so much, full of life, gave their lives for the homeland … each loss, just a few days ago we were talking and laughing, playing with each other jokingly, sharing the difficult days and now … there are none, they have become a memory, a story … I am still looking for our battalion commander, Mher Stepanyan, who is missing since then … The enemy was trying to surround us at all costs, I was on the left wing, I was leading the artillery fire, my commander was on the right. In the right part, the enemy was so close that their conversations could already be clearly heard …

They fought a heroic battle, did the possible and the impossible. The enemy’s foot did not enter the trench. When the enemy retreated, after the fight Alik was looking for the commander, how many times did he go to the place where he last saw him during the fight …

“The soldiers said that he was wounded and was shooting his weapon, telling the others to get out while he wanted to keep the position. He was an older friend to me, a fighting friend, like a brother…

“After the war, my attitude towards everything changed,” the major notes. “I am more attentive, more compassionate, more caring towards my comrade-in-arms.” He saved your life on the battlefield, you saved his … And no one knows what might happen tomorrow, let’s not go offended by each other …

“War is a cruel thing, a painful lesson, but also a lesson in correcting professional mistakes,” Alik concludes.

On the battlefield, the enemy had an obvious advantage, the balance of power was disproportionate, we were fighting against the Azerbaijanis, the Turks, the Syrian mercenaries at the same time … So, we must be even better prepared. We must always rely on ourselves, reorganize, become stronger, stronger, and be one step ahead of the enemy. Our struggle is not over yet, our war is not over, we will return the occupied territories …

By the way, we also have to make changes in the family “strategic plans”, to have many children … 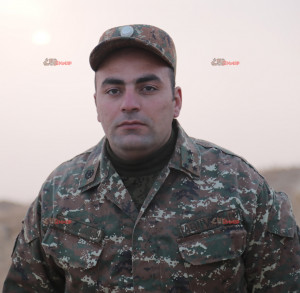 … Deputy Commander of the Rifle Battalion of the military unit, Captain Armen Mkrtchyan is also one of the officers who went through the turmoil of the war. Armen’s brother is also in the military.

The young man from Gyumri studied at the officers’ forge at the Vazgen Sargsyan Military University.

“We live in such a region that we must always be ready for any development, the arch-enemy is in front of us, and the profession of the defender of the homeland is one of the most important, the most primary.

When the war broke out, our battalion commander, Lt Col Mher Stepanyan, headed for the front line late at night. Most of us have a laid back attitude when it comes to painting a picture about ourselves.

They were already on the front line at dawn. The shells exploded all around, spreading death, destruction … the commander of the reconnaissance platoon was killed with three contract soldiers, then more victims …

One thing on his mind was to strike back at the enemy, to punish with his own handwriting, in his own style, and much more.”

“On the first day, our unit struck an enemy tank, a Ural full of ammunition, and a pickup truck,” the captain lists the damage done to the enemy.

However, the enemy dominated by both human resources and equipment. It was hard, unspeakably hard to see the areas where the blood of your comrades-in-arms was shed, heel under the enemy’s feet, it was also indescribably hard to see how the leader of the neighboring country raises their flag in the occupied territories …”

Armen is silent. There is a heavy silence in the basement, everyone has their own thoughts.

“Years ago we were able to defeat the enemy with limited capabilities, in small numbers, armed with hunting guns, we will be able to do so again,” say the soldiers, with every word dripping with determination. “Every minute and second will be aimed at strengthening us so that we can bring back even more sanctified land at the cost of our friends’ lives.”

“We must try to put an end to these wars with ourselves, to inherit a peaceful sky and a peaceful land to our children,” Armen continues, “But if our generation fails to complete its work, our sons will continue the work of fathers. My son is still young, but he will become a soldier …” 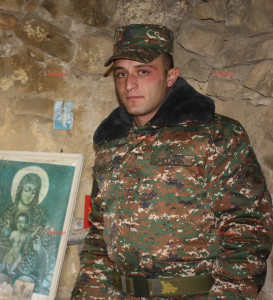 The group commander, contract Sergeant Vahe Stepanyan, is serving in the same military unit with his brother Mushegh, both of whom took part in the war. After being demobilized from the army, Vahe decided to serve on a contract basis, and his term service took place in Shushi.

“I am from the border village of Bardzruni, my father participated in the self-defense battles of the village years ago. Today the same enemy is standing in front of us, who never makes peace, does not let life go on in its peaceful, normal course, people create, enjoy, but they always provoke wars …

On the battlefield, when the guns were silent for a moment, we celebrated the tenth anniversary of the son of one of our contractors, celebrating with water and cigarettes. He said, as soon as this nightmare ends, we will celebrate the birth of my son with the same staff … He did not return …

One did not see the birth of his first son, the other did not have time to start a family, enjoy the warmth of the family home, hear the baby’s first toast, and another ….”

We owe our dead friends revenge.

Photos by author and ARSHAK KHACHATURYAN