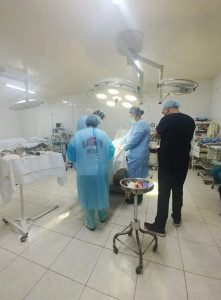 On September 27, just a few hours after receiving the news of the start of the war, Karine Avanesyan was on her way to Artsakh with her two friends, Victoria and Tatev, both doctors, and accompanied by her father.

They were going to join the “white army” soldiers.

Karine graduated from the State Medical University and is currently studying for a residency in general surgery.

During the April war, you would meet Karine with the same team at the Yerevan Central Clinical Military Hospital, but this time they hurried to Artsakh.

There could be no other decision. Years ago, when the enemy was again trying to evict the Armenians from Artsakh at all costs, when there was another life-and-death struggle on the borders, Karine’s uncle Zakar Avanesyan, who was a student at Yerevan State University and the law at that time allowed students not to take part in the war, joined the defenders of the homeland. “We will still have time to study, education will wait, now the question of the existence of the homeland is being decided.”

Zakar has always been in the hottest, most dangerous parts. The patriotic hero fought and died like a hero …

“Today too, the cream of our nation stood up against the enemy. We have wonderful youth, strong, fearless guys who love the homeland as much as life and more than life,” says Karine. “Each of them is a walking legend, the embodiment of a hero.” The wounded in the hospitals, still not fully healed, regardless of the degree of injury, the complexity, hurried to the doctors, saying, do something, let’s get up soon, go to our positions, the boys are waiting. In that state they could even joke, write it off now, the rest of the days we will come later, we will fill it… What strong, strong-willed guys we have, I can not describe,” Karine continues excitedly.  “I am proud of our brave, fearless soldiers. It is true that we are not new to their acts, but every day fills the heroic pages of our history. Their spirituality, self-sacrificing devotion gives us all new energy, new impetus to re-evaluate our potential, to do the possible and the impossible in every field, like our soldier, like a soldier, to serve in the army …