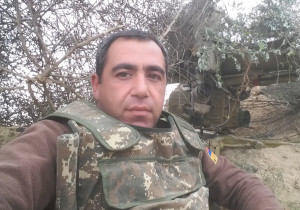 – Gevorg, you, your battalion, took part in the war. I could have done a more extensive interview with the commander of the regiment that went through the war, but it is interesting to hear the opinion of the middle commanders about this war. Was it a surprise for you or was it expected?

– The soldiers of the Armenian army have always waited for the attack of Azerbaijan since the Artsakh war. Before the September attack, when Turkey and Azerbaijan held joint military exercises under our noses, when Turkey concentrated its military personnel in Azerbaijan, near the Armenian border, we all understood that without war those weapons and soldiers would not leave Azerbaijan.

We were both physically and psychologically ready for that war. But what we saw on the battlefield was beyond our expectations.

– In other words, we were not prepared for such a strong war, did I understand correctly?

– We did not envisage that we should fight against the best units of the second NATO country, Turkey, with human resources and weapons.

– But you said at the beginning of the conversation that you predicted Turkey’s participation in the war based on the content of the recent military exercises.

– Being involved is one thing, just participating in the war, rendering comprehensive assistance to the conflicting party is another. On the battlefield, we met a huge force – mercenaries from different countries, Turkey, Azerbaijan, the joint force of the states arming Azerbaijan until the last moment.

– What was the mood of the army, the spirit after seeing that force?

– I can speak about our contract battalion, which bravely, with high spirit, fought against the Turkish-Azerbaijani-terrorist army with all dignity.

– In which areas did you fight?

– In Karvachar and Hadrut. Things should be called by their names. Our battalion gave the first battle in Karvachar. When the enemy army started firing, we were amazed by the intensity of the fire. It can be said that a rocket fell on every square meter. It happened that one “Kamikadze” was thrown at three people.

Yes, the Turkish-Azerbaijani-terrorist army had only one advantage over us: the number of weapons (especially air strikes). But even in these conditions, with such a ratio of forces, we have caused incomparably great losses to the enemy. Its weapons and personnel were ruthlessly destroyed, but they were immediately replenished.

– Replenishment of troops or military equipment?

– Both. We were fighting one against ten, one against twenty. From the fire of our boys, the enemy was falling like reaped grass. It was a strange scene, you will not even see such a thing in movies. When the army fell, the wounded were left helpless on the battlefield, and immediately more and more troops came. They trampled on the dead and wounded, and they too were massacred, and immediately new ones came upon them, as if there was no end.

– So, you are saying that it was impossible to win this war.

– The Armenian army would have won even if it had fought against thirty or forty, we would have destroyed the enemy, we would have resisted countless tanks and other weapons, but we were powerless against air strikes. Enemy drones dominated this war.

– Is it true that you personally hit three tanks?

– Yes, we were defending the bridge entering Hadrut. It was there that I hit the three enemy tanks entering Hadrut, and we blew up a Ural loaded with weapons. I had a temperature of forty degrees at that time. I was lying in the car seat when Col Ghazaryan (who later was killed while performing a combat mission) said that armored vehicles were approaching Hadrut again. I immediately took out the drip device, took the Fagot and positioned myself. We and our staff did the impossible, we fought to the end for our land. The people should greet the soldiers and officers returning from the war like heroes; they fought selflessly…

– What is your and your people’s sate of mind now?

– There is pain in our soul, but we have not reconciled with the loss, it gives us strength.

– What does it mean that we have not reconciled?

– Our people have not reconciled even with the loss of Western Armenia. We must continue on our way, knowing for sure where we are going, fulfilling our national dreams. We must believe in ourselves and for the realization of our national goals, be ready for precious sacrifices not only in war, but also in peace. Every day, even every hour, let us take a small step towards Shushi, towards Hadrut, towards each of our lost lands, towards Ararat, towards Western Armenia. It is difficult to say how many steps will be added to the step, how many generations will take its small but steady step, but there is no doubt that this way will lead us. Our path is fair, honest, our people are talented, brave, patriotic, with a strong past … And a great future awaits them. We just lost a battle. Turkey, which is gaining new enemies day by day, is impassable and stateless, with its small but dirty history, its internal ethnic problems, its far-reaching insane ambitions, it has no future.

– You name Turkey more than Azerbaijan, after all, Shushi is part of Azerbaijan and not Turkey.

– In this war, Azerbaijan was a third, fourth player. The Azeri army hiding behind the mercenaries, no matter how large it was, could not resist the Armenian soldier. We fought against the Turkish army and mercenaries and gave in not to the professionalism and spirit of the Turkish army, but to its state-of-the-art military equipment. The centuries-old war between us and the Turks is not over, but has entered a new phase, it will end with our victory.

– 600 years after losing the statehood, Armenia appeared on the world map again, because for 600 years we did not accept the loss and fought, believing in our victory. I am sure that we will not leave this struggle to our sons, we will finish it much sooner. It remains to be filled with optimism, to believe in the future of our Earth անալ to become stronger, to become stronger, to become infinitely stronger…