ARTSAKH, THE SYMBOL OF OUR VICTORY AND ETERNITY 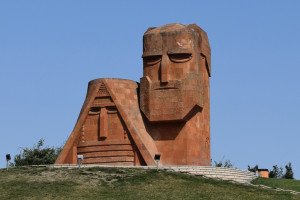 “Armenia, country of paradise”… The poet admired-loved-worshiped, did not call for heroism, did not give a message to the generations to keep this rocky-difficult land… Country of paradise, he said, and we understood that our share is here, this little one, on a rocky, native land, here is our paradise, our home, our root. Our homeland.

We have interpreted the mystery of the homeland for generations. An Armenian born and raised in distant Australia, America or India suddenly heard the call of the homeland, the gravitational force of the motherland. He unsuccessfully tried to get rid of that sweet-dear-suffering burden…  With blissful pain, tangible and clear, with all the senses, with all the blood cells, he felt his root living and breathing in the distant homeland, unseen or unknowingly, in the subsoil of the motherland, fragmented, wounded, but invincible and endless. We are Armenians and you will not vaccinate us against any nation. We will live in Australia, America, India, but we will not become Australians, Americans or Indians, because our roots do not die in our native land, it continues its beat in the memory of our blood, our genes. And he calls. We have been deciphering the mystery of the homeland for centuries. “Oh, homeland, bitter and sweet,” said one of the great Armenians, and an anonymous, ordinary Armenian hand touched the ground, caressed it with rough fingers, and the fingers recognized the soil. The fingers and the ground beat with the same rhythm, they spoke in the same dialect. We can not lose that land. The Armenian must have a homeland, not as a gift, as a heavenly grace, but a difficult, but definitely earned… And we have put everything on the scales. And our modern history has been a viper of struggles, heroism and victory. 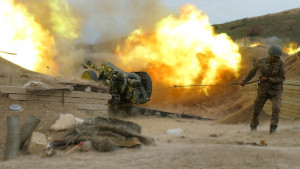 The ordeal was from the beginning. Under the nomad’s nose, next to the barbarian, we have turned our rocky homeland into a paradise with the warmth of soul and arms. And we are creators, not killers, and we are peacemakers, not fighters. But we must endure the test that lasts for centuries and does not end.

… We lost our historical lands, but we won a moral victory, the history textbook he taught and did not explain how defeat could be moral. Moral victory over lost lands, thousands of human losses. And while we, mourners and beggars, were trying to convince everyone that we had been massacred, killed, our historical homeland had been taken away, the world was restrained and civilized in its condolences to us, tired of wasting compassion and listening to our mourning. And it did not understand what we wanted, what the condolences of the peoples who had won their place under this sun, who had long ago ended their moral war with a real victory, would give us, when our khachkars are desecrated, our sanctuaries are desecrated, our lands are given to strangers. They did not understand, because our language, the language of the one who asks for justice, the one who seeks mercy, was alien and incomprehensible to those whose ears had long ago become accustomed to the behavior of force and rebellion. We had to learn that language no matter how much our hearts were pierced by its fiery spirit. We had to dig our blood and feel the beat of Tigran the Great in our pulses. The pride of Avarayr, Sardarapat, Bash-Aparan lived in the depths of our collective memory, which suggested a new meaning and meaning to the word victory. And reminds that our ancestors also celebrated glorious victories. The enemy felt the strength of our arm on his quadriceps and knelt before us. We won when we believed in ourselves and each other. When we were a gathering, united and hopeful. Because even when we have lost everything – land, house, things, life and… Homeland, somewhere in one of the billions of blood cells, in the depths of the infinite memory of the gene, we have kept the belief of victory. And at the most crucial moment, the blood spoke. And one of its billions of cells, the most powerful and spiritual, has infected our whole blood with the “bacillus” of courage – the French-Armenian, the Persian-Armenian, the Russian-Armenian, the Armenian disguised as a Turk, a Kurd. And that fire will not go out until the roar of the Armenian tricolor reaches all the origins of our historical homeland. Until our fragrant-holy prayer blossoms in all Armenian monasteries, until the Armenian national anthem is sung on the lips of every Armenian, until … 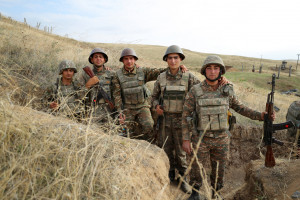 … “When wheat grows the size of a rosehip.” We could not wait that long. Our wheat did not turn into a rosehip under a foreign breath. “Do not lead us into temptation,” we had asked the Most High forever and ever. But the Lord’s patience was running out. And the Lord chose us. Probably we, only we could withstand that ordeal.

We will keep Artsakh. My brother, your father, the other boy, the husband of someone else. The handwriting was the same. From the very beginning, a strong blow, a sharp psychological attack to scare us, to remind us of the image of a predatory, terrible Turk of the early 20th century, to awaken the dormant horror in our blood. And that’s what happened. Everything was calculated in detail.

But this time the pain did not become fear, the grief did not cause terror, the loss did not oppress us, it did not bring us to our knees, but called for just revenge, it became courage, strength and heroism.

“I am convinced that we will win,” say all those who volunteered to go to the frontline to defend the lands of Artsakh. “Why?” I ask. “Why are you sure? What guarantees are there to win?” There is no answer. Because there is no guarantee, except for the great desire to keep Artsakh, the willingness to sacrifice one’s life for the liberation of Artsakh and the unstoppable force born of the intertwining of revenge, pain, love and wounded human dignity.

We will keep Artsakh because we have become a national army. Nation-Army.

Monte has said, “If we lose Artsakh, we will turn the last page of our history.” We are neither the first nor the last nation. How many nations have been thrown behind the scenes of history or have become history and memory in general, leaving the lessons of their bitter fate to those who have not yet lost the last opportunities to live, survive and become stronger.

We have learned lessons from our own history. We have learned lessons from our individual losses. Our counselor is our pain, our bullets. We will keep Artsakh. Artsakh will not become a new “song” in the sad, meaningless sanctuary of our defeats. We know where the border of our country starts and where it ends. Because our army is at the border. The traces of the Turks will be persecuted from Artsakh again. Artsakh will heal the wounds of war, live in the rhythm of peaceful days, and its borders will be protected. And the blissful pride of real victories will make the sad self-deception of moral victories an irreversible memory. Our army will win, our soldier and officer, the volunteers and the reservists will fight heroically and clean our land from the enemy. We will keep Artsakh, we will restore our destroyed churches, we will save our khachkars, giving a message not to spare the most precious for the homeland to the rising generation. Now our mourning is anger, pain is pride, suffering is revenge. And on the stage of history, fate will not hear the last creator of the Armenian biography and will not close the curtain in the middle of our struggle, no matter how many nomadic Azeris, stateless Turks and terrorist thugs gather near the borders of our homeland.

We raised our swords when the knife reached the bone. But our last blow was unmistakable. And the enemy knelt from our last blow. That last blow was sometimes delayed for centuries, sometimes it seemed that there was no strength left to strike, but when the time came, we turned our will into steel, we saved our arm and hit it. We won when it seemed impossible to win. We won one by fighting against ten, a hundred. And when the enemy burned our houses, abandoned mothers and children, tortured unarmed and helpless people, when unhindered, when he desecrated our sanctuaries, we did not become beasts against beasts, we did not respond to atrocities with atrocities. We did not raise a sword on the fallen, we did not shoot the unarmed enemy, we did not disrespect the Turkish woman. We did not behead the Turkish child in front of the mother. We have remained Armenians. We said that the son is for the homeland. We have appointed our son a border guard. We have made our son’s heart and life a shield before the enemy, so that our land may remain unconquered. Stay Armenian. This is how we have lived and this is how we will live.