WE WILL KEEP THE MOTHERLAND STRONG AND UNDEFEATABLE 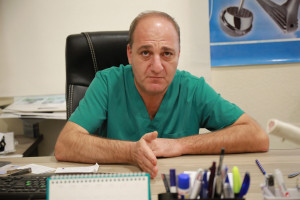 Many soldiers and volunteers who were wounded as a result of the large-scale war unleashed by Azerbaijan are receiving treatment in various medical centers of the capital.

Arsen Vahramyan, head of the Traumatology and Orthopedics Service at Shengavit Medical Center, who was on the front lines in the first days of the hostilities, said that the stage-based medical care for the wounded servicemen was fully organized. I assess the health condition of our wounded receiving treatment at Shengavit Medical Center as satisfactory and good. We do not have servicemen with serious bodily injuries, all of them will return to the ranks fully recovered after receiving the appropriate treatment. The mental state of the boys is good, moreover, the fighting spirit is indescribably high, everyone is constantly repeating the same thought. “Accelerate our healing, get us up, let’s join our comrades-in-arms.” 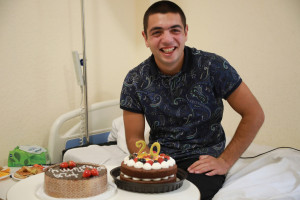 We are in the hospital room. In my mind I mixed a thousand words to inspire and strengthen the boys. But the guys are having fun. The walls of the hospital room are decorated with balloons, there is a cake on the table, the number 20 made of candles on it…

It is the birthday of one of the wounded soldiers, and the medical staff, who surrounded the wounded boys with the warmth and compassion of a relative, gave a nice surprise to the jubilee. What a birthday without a gift… A wounded soldier was presented with a weapon, but … musical.

“Although only a few days have passed, but I miss my friends very much, very much. The guys’ spirit is high, they fought fearlessly, even the guys who did not stand out in everyday life, were fighting like a hero They were fighting heroically… We were fighting with a grenade launcher, the enemy was targeting us and was constantly firing at us. Three projectiles fell too close to us, we hurried to the hiding place, but my leg was damaged by a shrapnel. I’m already well, I’ll be out soon and join them again.

I will continue to practice karate after my service. Doctors say my injury will not interfere with my training.

Robert is a three-time champion of Armenia, having twice participated in world competitions. 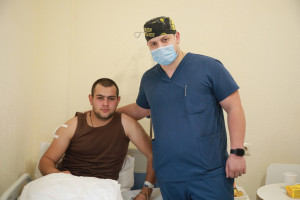 Narek Hayrapetyan from Gyumri is in the opposite room, he was wounded on the first day of the war in Hadrut. Narek is quiet, avoids talking. The nurses come to my aid.

“He is a modest boy, and he has a beautiful smile on his face.

All my efforts to “talk” to Narek are in vain.

“Say something,” the nurse from Gyumri joked.

“Be safe, guys, there is not much left, be patient, I am coming.” 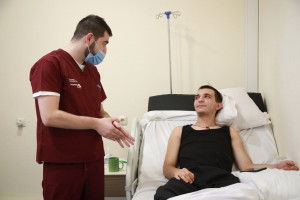 Garik Khalatyan also received a shrapnel wound on the very first day. Garik lived in Moscow before his service and is a cook by profession. When it came time to enlist in the army, he returned to his homeland to serve in the national army without hesitation.

“The shelling started early in the morning, we hurried to the posts. Unfortunately, I did not have time to fight. I will recover quickly and go back to the war.” 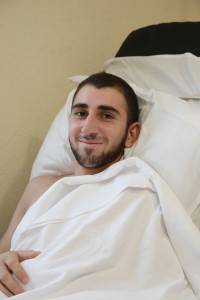 Edgar Kocharyan had only three months before being discharged.

“On September 27, the alarm sounded, we hurried to the positions. The next day we moved on. The enemy was trying to prevent our advance with fire. I was wounded. My leg was operated on in Artsakh hospital, then I was transferred here. At the hospital, I learned that my commander had been awarded the title of “Hero of Artsakh.” Our people carried out a brilliant military operation, inflicting heavy losses on the enemy. I am very, very proud of ours. Every inch of our land is kept with blood, and the blood shed by our comrades-in-arms obliges us even more to keep the Homeland strong and impregnable … 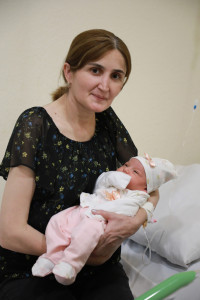 After visiting the wounded soldiers at Shengavit Medical Center, we also visit the center’s maternity hospital. In recent days, children from Artsakh have been born here, far from home, but, most importantly, on home soil.

Little Lea was born a few days ago, she is the third daughter of the family. The serviceman father, who is now at the frontline, has not seen the girl yet, he only heard the baby’s voice on the phone.

“There is nothing more precious in the world than peace,” says Arevik Baghdasaryan, a mother of a newborn from Stepanakert. We grew up under shelling and now we only dream with one heart that our children will grow up under a cloudless sky. Let Leas be the herald of peace … We are waiting for the victorious return of our father and all our soldiers.