MY FRIEND IS A ARTSAKH HERO 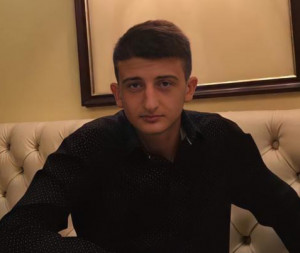 Davit Grigoryan, a soldier of the Armenian Army, destroyed 15 enemy tanks while repelling the Turkish-Azerbaijani terrorist attack, which entered our land. Naturally, I first wanted to talk to the hero’s mother, Mrs. Susanna. But he said that his best friend, Sargis Hakobyan, would tell the best about Davit , because Sargis and Davit have been friends since the day he was born. They played together in the yard, went to kindergarten together, studied in the same class, were together during the military service.

A: I was in the bus, and suddenly Davit ‘s cousin called and said, “Sako, did you hear that your friend Davit has received an Artsakh hero title? He has hit 15 enemy tanks և 1 armored vehicle.”

I could not believe my ears. How can one person hit 15 tanks and 1 armored vehicle? It was unbelievable. And when I learned that the President of Artsakh had personally announced the news on TV, I immediately thought about what my friend went through, what a cruel battle there was, what efforts he concentrated on his soul and body that he was able to hit 15 tanks and 1 armored vehicle. . Along with that concern, my soul was filled with extraordinary strength and pride. It was as if I was the hero, as if I had hit those tanks myself. You involuntarily rise next to the heroes, they prompt you new, higher standards, set a new bar of morality in front of you.

Q: As a child, did you think during your school years that Davit  could become a hero? Were there any preconditions for heroism in his temperament?

A: We have a wrong idea about heroes, if we think that they should have heroic behavior in peacetime, in human relations, when communicating with relatives, neighbors, friends. Heroism lives in the depths of the human soul, it is not at all necessary for the inner strengths of a person to be openly displayed. Davit  is a quiet, modest boy. It was like that in the kindergarten, in the school, in the military unit. He was not at all quarrelsome, he was very tolerant and peace-loving. But he always strived for the maximum result, he was not satisfied with the achievements. Davit  was a good student, capable, and hardworking. I competed with him, I wanted to achieve his results, but I did not get upset when my friend was more successful. We both participated in the Kangaroo math competition, but Davit  won. We both went to chess, but Davit ‘s results were higher and he was sent to participate in the tournament in Georgia. We were both part of a German-speaking group, but Davit  was offered the opportunity to continue his studies in Germany.

Q: You are describing your friend’s success with such a love…

A: Davit ‘s writings were copied passing from hand to hand. Davit  helped everyone. He was self-contained when communicating with acquaintances, he did not even open up at home, but he became a different person with close friends. He was so funny, he had such a delicate humor. We were not going anywhere without Davit , because he was spreading joy with his presence.

Q: And did Davit ‘s courage and patriotism somehow show up, even among his close friends?

A: He was so sad during the April war, he said, we must fight in such a way as to put an end to all this, so that this fight will be the last. That is how he fought with all his might, with all his patriotism, with all his hatred, against the enemy terrorist army that was bombing the civilian population, firing on kindergartens and churches. Davit  proved his love for his homeland, his masculine dignity, and the power of his spirit.

Q: Does he have a girlfriend?

A: No. He is such a reserved and self-contained boy that even if he loved someone in his heart, no one knew. And at school, Davit  was loved by everyone — boys, girls, and teachers. If I were to describe Davit in one word, I would say that he was very lawful.

Q: How did it happen that you, two childhood friends, served in the same military unit?

A: It was a happy coincidence. I was the first to be drafted. When I learned that I was going to serve in Hadrut, an inner voice reminded me that in six months Davit  would come to our military unit.

Q: Did you tell Davit  what your inner voice said?

A: I told him, he laughed, he couldn’t believe it. During our service, we talked on the phone almost every week. Davit was very interested in the service, he asked about the positions, about the combat duty. He spent six months of his service in a training military unit and became a bassoonist. One day I saw Davit in a military uniform appear in front of me. I was both surprised and very happy.

Davit quickly adjusted to his service life. He earned love and respect as an exemplary soldier. I remember the day I was demobilized, holding my bag and taking me to the checkpoint. He was upset.

After my demobilization, I often visited Davit ‘s mother. He said, “I take the longing for Davit  from you.” When I learned that my friend had become a Hero of Artsakh, I ran to their house again. Davit ‘s mother hugged me as warmly as if she were hugging her hero son.

Q: Did you talk to Davit  after receiving the title of hero?

A: Yes, I spoke yesterday. I said, return safely to enjoy your glory. It was as if he did not realize the greatness of his heroism. I am looking forward to the return of my hero friend to realize our dreams together. And let’s do bolder, bigger and more beautiful deeds in the homeland that has finally won.