WHEN THE NATION BECOMES AN ARMY, IT IS IMPOSSIBLE TO BRING HIM TO KNEES 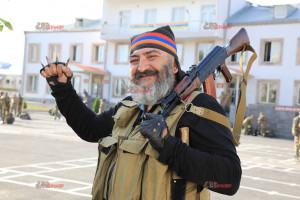 There is a large influx of people in the country who want to enlist in the military. Before the official mobilization was announced, many people had already gathered at the military commissariats, ready to go to the front line.

The old people were hiding their age, their health problems, the teenagers were increasing their age, the girls and women were referring to the fact that a lion is a lion, whether it is a female or a male, only to join the boys standing at the border.

Young and old have stood up, all political parties have forgotten their differences for the sake of the homeland and peace.

There are a large number of reservists and freedom fighters among those leaving for the border.

The head of the Tigran Mets Military School, Col Koryun Ghumashyan, is a participant of both the Artsakh and April wars.

“We are going to finalize our fight with this war. We could not leave a peaceful land to our sons, but now, together with my sons, my nephews, my son-in-law, we are going to the front to leave a peaceful land to our grandchildren. And it does not matter whether mercenaries have come or the enemy is armed to the teeth and has no limits to its cruelty. The Armenian Christian cruelty will respond with cruelty from now on… No matter how large is the amount of the weapons the enemy buys, they will ‘give’ them to us,” says Reserve Col Grisha Sargsyan, the chairman of the Union of Veterans’ Special Purpose Police Detachments. The colonel and his son Zeus also volunteered and joined the platoon, which consists mainly of those who served in the army. For 30 years, although we were the winning side, we made some concessions in the negotiations. Now we will dictate the rules of the game. We will bring the enemy to his knees and we will return with a victory…

“We will come back dancing Yarkhushta with joy. No concessions, not an inch,” says Rambo from Aparan, John Hovhannisyan.

“The enemy soldier cuts the neck of an old, helpless man, brags about it-The Armenian soldier is a defender, a noble person…

Hamazasp Gareginyan from Artik goes to the border with mixed fellings of revenge and sorrow.

“My son, Gor, was killed in Talish, in the same position that his uncle liberated years ago.… Now I am going with my brother to avenge my son.

“Death to those who want our death,” says the commander of the Kornidzor detachment, Arayik Khudaverdyan, and adds: “We are just doomed to win. God willing, we will return all the lost lands with the courage of the Armenian soldiers.”

Ruben Sargsyan: “I have served in the police forces, I have two children. I am going to the frontline for my family, for my land, who else if not me?” 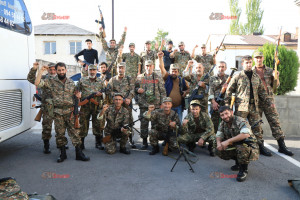 Varuzhan Barseghyan: “I participated in the Artsakh war as a member of a special detachment. I have two sons, one of whom is an April War participant. They both decided to go to the front line.

Vardan Simonyan (vice-president of Artik YVU, commander of Artik’s “Sasuntsi Davit” detachment): “I have faught everywhere: Yeraskh, Voskepar, Shushi, Lachin, I also participated in the four-day war. This is the same enemy with the same insidious handwriting.”

“This fight is for our dignity,” says Arthur Aghajanyan from Yerevan.  “I am also a participant in the battles, I am 54 years old, as long as I breathe, as my heart beats, I am a soldier of the homeland.”

Reserve Maj Gevorgyan from Shirak region smiles under his nose.

“I have a grandson and a great-grandson. Do not look at my age, I also participated in the Artsakh war, my experience is needed on the battlefield. My two grandchildren are now at the frontline, how I can sit quietly at home.”

Queues and gatherings of people who want to enlist in the army are everywhere.

When a nation becomes an army, it is impossible to bring it to its knees, says Garegin Nzhdeh ….