We are in the Central Military Recruiting Center, where, following the message of the Armenian prime minister, we see growing flow of young people who have expressed their readiness to go to the front and have been demobilized from compulsory military service during the last year. Looking into the eyes of these guys, seeing their determined and bold stance, I draw parallels with the images of the “conscription” in Azerbaijan these days, how the police forcibly gather and literally drag their conscripts to the front.

I talk to our brave guys, and the confidence in victory grows stronger and crystallizes. 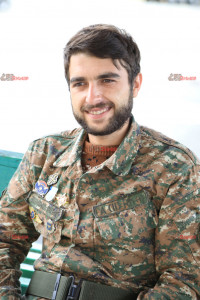 Arman Gasparyan’s chest is decorated with many badges testifying to his excellent service: “Army Excellent “, “Brave Fighter”… Arman is an excellent specialist in air defense, he finished his military service in January of this year, now he is in the ranks again.

“In the videos circulating on the Internet, we see the panic in Azerbaijan, how the Azeris force their conscripts to the battlefield. This only means one thing. This land is not theirs, this land is not dear to them, they do not like this land, they are just forced to leave. I have seen videos where they teach their children, “If he is Armenian, then he is your enemy.” But they do not sow patriotism that way; it is just an expression of envy. I served in Hadrut, I am very attached to that place, to the population… It has become a home for me. I have communicated a lot with the people of Artsakh and I am convinced that the spirit of the people of that beautiful and wonderful highland is different, from a 5-year-old child to an 80-year-old grandfather, all of them are soldiers. At the end of my service they said: “Wouldn’t you like to stay here on a contract basis?” I replied, “It doesn’t matter, I will come back one day. I will come as soon as necessary.” Now that day has come. I can not remain indifferent. Peaceful towns are shelled. So much sweat and blood has been shed for these towns of ours that it is impossible to give up even an inch of land. I will do everything in my power. My cousin fought there, unfortunately, he is wounded now. We are all ready to go and fight. This is not like any of the previous wars. This is a “war of the mind.” Our army now needs as many smart, trained guys as possible. I have always been guided by the motto that you should live your life as if it were your last day. Now again the question of life and death is raised, not only for me, but for my whole nation, people. You have to look at everything realistically and move forward with cold judgment. I will call on our other demobilized to join us as well. We can strengthen our powerful army to the full potential. Let everyone enlist in the army these days and stand by us. We don’t have an inch of homeland to give away. The victory is ours. ”

If you don’t know him, you will not notice among the young people, you will not single out the modest and calm young man, who passes by the boys in the appropriate rooms of the team. It does not differ from the others. the same anxious, impatient but determined look, the same 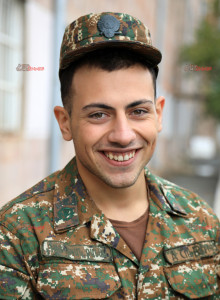 military uniform and demeanor, the same emotions. He is Ashot Pashinyan, the son of the Armenian Prime Minister.

“I have been demobilized for two months,” says Ashot.  “We have always known and realized that such a thing can happen and we have always waited for it. I am realistic in character. We will solve our problem, but it is very important because it will solve many problems in the world. Armenia and Artsakh are our home. This local problem is the manifestation of a much bigger problem. And we will solve our problem. … These guys who are here today, ready to go to the front, are actually happy because they came here for the happiness of others and are moving forward. We see that we are approaching our goal step by step. The basis of happiness is when you see that you have taken one step closer to happiness. Now is a turning point on the front. We will solve this issue. For the sake of peace, for the sake of humanity, for the sake of the peace of our planet. Definitely, we will solve, we will solve for ourselves, we will try to solve for the rest, I do not know, will we manage to solve, life is not as long as there are many problems.

It is not a big deal that I go to the front today like everyone else, we are all equal. We are all brothers, equal in everything. I have friends who have been wounded, every day we hear about the selfless deeds of our hero boys… This problem is universal and until it is solved, I can not rest easy.

The fact that the world is on our side today, not on them, is already a great thing, it is encouraging, so the universal values ​​that humanity is still guided by, which is the basis of our struggle, freedom, still exist and are used in the world. And as negative as human standards are, our enemy’s struggle is based on the cult of money, wealth, loot, terrorism, and so on. And if the world turns to us today, then it is still possible to save the world.

I want to tell the guys fighting on our front lines. Dear guys, we are coming too and we will all solve this issue together. We will solve it once and forever.”

David Chagharyan is a gunner. He has served in Artsakh since 2005. He has defended Askeran, 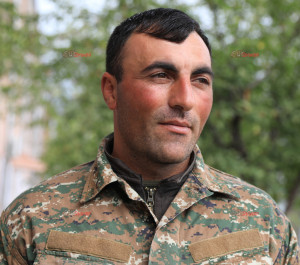 “Now we are leaving in a fighting mood,” says David. “As soon as I heard the call of our prime minister, I was ready to leave early in the morning.” I registered and waited my turn. It was my turn. I’m looking forward to when we will move, when we will get there. Our wounded land is calling. We have no way back. If we go, then we must win. We must keep our land. We ensure the peace of our civilian population. I myself have 4 minor children, but I do not hesitate for a moment, I am also going to the frontline for my children so that we can fight together with our boys and win. I wish all our Armenians patience these days. I buried my hero brother two days ago. I have a revenge to take, not only for my brother, but for all our heroes who are dying for us all these days. I still do not accept the loss of my brother, I do not believe that he does not exist… He has always been, is and will remain in my heart. He was an artilleryman, a platoon commander. According to the official report, my brother was killed while rushing to rescue the soldier, they were killed together with the soldier.

I am only going in a fighting mood, I am happy, because I do not doubt for a second that we will win.” 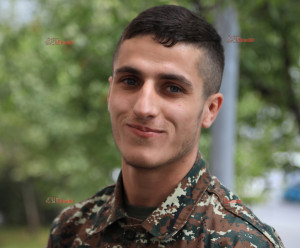 Husik Petrosyan had come back from Russia and served the homeland in 2017-19, completing his military service with honor. He was in Rostov-on-Don when he heard that there was a war in the homeland, he immediately packed his things and hurried to the homeland. The family did not oppose the son’s decision.

“We have to finish this job. I served in Mataghis. I know that our boys and I will hold our breath until the last breath, we will die, but we will not give an inch of land to the enemy. When I heard that there were fights to the death, my patience ran out, I could not sit still and follow the developments. I made a firm decision and came. If we all unite, strike like one fist, the enemy will have no chance against us despite it huge arsenal. Many of my friends are also in the line, waiting their turn. I’m a gunner. Artsakh is calling me. I spent two years with good and difficult days. And that’s why I want to go again. Our goal today is to win and return victorious to our homes.

Ara Hovakimyan is a cook. As soon as he and his friend heard the Prime Minister’s speech and

learned that the restriction on those who had recently completed their service has been lifted, immediately decided to go to the front.

“Even before that we had made our minds.From the very beginning we have been following the situation through media. We wanted to go from the beginning, but they would not let us. Now the opportunity has been created, we have come to go to Artsakh. And I am a gunner by military profession. I am sure I will go and be useful. I saw that life, we were on combat duty. Of course, we have not seen a war of this magnitude, but we are ready. The army and service have changed a lot in my life. I served in Hadrut. We have heard a lot these days, two people from our military unit have already been awarded the title of hero: our Col Shakaryan and Maj Ghazaryan. We have seen them every day, we know what kind of people they are, what kind of soldiers they are. We are proud of them. Now I came with my friend. We are trying to imagine what is happening in Artsakh now, but it would be better to see with our own eyes.”

“We are going to bromg a independence, a free and happy homeland, so that such a thing never happens again. Let the victory be final,”Ara’s friend says the last chords of our conversation. And they go with the determination to come back victorious.