WE ARE PROUD TO STAND AT THE BORDER 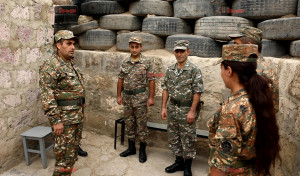 Overcoming the rocky road, the military UAZ confidently moves forward along the winding road bordering the border. The forested road ends at the entrance to one of the defensive positions defending one of the most important areas of the Northeast border.

“Lieutenant Colonel, Senior of the position, Lieutenant Nersisyan,” Susanna Nersisyan introduced herself to us and accompanied us to a recently built military base. The deputy commander of the military unit, Lt Col Nver Mangasaryan conveys to the staff the exhortation of the commander’s superior command to be careful and vigilant, never to weaken vigilance and, if necessary, to resort to restraining actions.

“I can say for sure that our servicemen are psychologically ready to fulfill their combat tasks,” says the lt col. Recent actions have shown that the service is always vigilant, and our servicemen are ready to carry out the set tasks in the best case in case of any development, to stop all provocations of the enemy. At the moment our border is relatively calm, but the situation can change at any moment…

While we were talking to the lieutenant colonel, it was time for the shift.

The senior of the position, Lt Susanna Nersisyan, is one of the soldiers who do not retreat in danger. Susanna, a graduate of the Vazgen Sargsyan Military University with honors, was legally eligible to choose a future job without a draw. After the events of July, however, she decided to carry out combat duty in one of the military units on duty in the north-eastern direction. She came, earned the respect of the staff, and two months later, the right and honor to become the head of a military base. She strived and finally achieved the desired goal. Now she is on combat duty at the border with her staff. 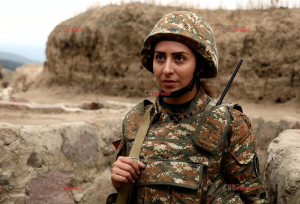 “As they say, ‘The homeland starts at the border,'” says the young officer. “I am also a part of the homeland. I could not do otherwise. I really wanted to be involved in the combat duty and have my contribution to the defense of my homeland, especially now that the homeland feels our special need.

During the conversation we inquired about the spirit of the staff and the combat readiness of the position. The answer was short and specific.”

“We are ready at any moment,” she said and unexpectedly ordered, “Position, fight, open attack of the enemy. Switch to circle defense!”

Seconds after the order, the crew rushed to the defense and reported that they were ready for battle. The surprise alarm and the sequence of steps that followed were impressive and eloquent. And we took the opportunity to meet the guys who were defending this important part of the border.

“Our village is a few kilometers from here, which is the largest in our region,” says contract soldier Levon Melikjanyan. “The large soldier who lived abroad for ten years continues,” both to improve and to protect the homeland I inherited from my grandparents. I have people waiting behind me: a family, three children. We are all proud to be on the border.

Like Levon, Karen is the father of the family. He says that during the service he remembers and misses his children endlessly. This is especially the reason for the sleepless nights spent at the border and the weapons on their shoulders. 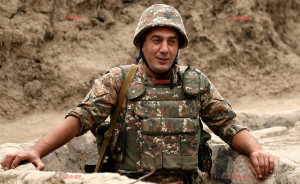 “Even when resting, when I have to close my eyes, I still remember that I have a child and my eyes remain half open. I have to protect my children. We are here for all our children. Loss of vigilance is unacceptable.”

Two months have passed since the July events. Even today, the enemy regularly shoots at this part of the border. These days there are life-and-death battles in Artsakh The only answer to the question “What awaits the emey in case of a new provocation in this direction?”

“Beating, nothing else,” says Levon, “a merciless beating, because this is our land, this is our border.” We will not allow anyone to step even an inch forward, to set foot on our soil.