AND, OF COURSE, THE VICTORY WILL BE OURS 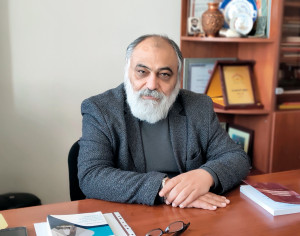 Director of the Institute of Archeology of NAS, Academician RUBEN SAFRASTYAN

First of all, I must mention the great courage that our soldiers, the military show, do not even spare their lives these days to defend our homeland from the aggressor. Glory, eternal glory to our military. I just bow my head to them.

The second thing to note is that this aggression carried out by Azerbaijan has been prepared for a long time. And the peculiarity of it is that it was prepared under the direct leadership of Turkey. There are many facts that this is the case, in fact, this time our soldier is fighting against the Turkish-Azerbaijani aggressor. This is a fight, this is a struggle for survival, a struggle for survival to re-establish our right to live in our homeland. The Turkish threat has hung over us for centuries, and now that danger appears in the form of this Turkish-Azerbaijani tandem.

The third important point I want to make is the geopolitical nature of this conflict. I am convinced that this struggle that we are waging now is not only a struggle for survival, in which we reaffirm our right to live on our land, but today the future of the whole region is being decided. If we imagine for a moment that we will suffer a defeat, which is impossible, in fact, we will pave the way for Turkey to assert its dominance in the region, its aspirations to take over the South Caucasus.

The fourth important circumstance is that, as the July events in Tavush showed, our army has reached a high level of professionalism both in terms of preparation and implementation of operations. We have painful victims, but we see how professionally the Armenian military fights. And this gives great hope. I am confident that not only will we succeed in repelling this Azeri-Turkish aggression, but we will also lay the groundwork for our future victories.

This is a struggle for the future of our people. Glory and honor to our soldiers, eternal memory of our martyrs.

The loud signals from Turkey show that Turkey, in the person of its President Erdogan, is already crossing all the “red lines”. And Turkey not only declares itself an ally of Azerbaijan, but also that it participates in its actions without hiding. We see signals from Turkey that these reckless actions are the result of recent years, when Erdogan has been aggressive in various parts of the region, continuing his policy of conquest. And our soldiers are showing Turkey its place in the region. Not only in the South Caucasus, but also in the Middle East, North Africa and the Mediterranean.

For the first time, our army will strike a strong blow at this aggressive policy of Erdogan.

I have mentioned it again, I must mention that in my perception the world community, the states have not yet fully realized the Turkish danger, that this is a threat not only to the region but also to different European countries. Especially recently, special network organizations have been formed in Europe, which are involved in various structures in European countries. There are groups of “gray wolves” waiting for Ankara’s order. And these “gray wolves” operate under the name of different types of cultural centers, which can be subordinated to the organization. These organizations are subject to Turkish intelligence. Turkey has set up a large network in Europe through “gray wolf” organizations, which is a threat to European countries. And some countries are aware of that danger. Particularly in Austria, where, for example, the “gray wolves” greeting sign by which they know each other is officially banned. And in fact, the network of “gray wolves”, I am sure, is getting stronger every day, because there are millions of Turks living in Europe, and among them these organizations operate under different names. Turkish experts now say that there are Turkish militants in 13 countries around the world, for example, in the form of peacekeepers. Entering Syria, for example, they carried out open aggression.

Initially, the Turkish presence was in Nakhichevan, but now, as we see, the Turkish militants, the “gray wolves”, are in Azerbaijan. The Turkish, Kurdish and Arab press mention the names of 17 jihadist organizations, whose representatives, as mercenaries, are now fighting in Azerbaijan, fighting and making sacrifices. I am convinced that if the number of casualties on the Azerbaijani side increases, if they see that their plans are not being implemented, Turkey will send its special forces. There are already rumors about it, even the name of those units is mentioned – the well-known “Commandos”. In other words, we are dealing with a very dangerous phenomenon in terms of both the region and Europe. Somewhere simply by these network organizations, in another place in the form of open aggression, in another place by their military presence. And all this is expanding. We have always talked about the Turkish threat. We now see that this Turkish threat, which was not stopped in time, is now becoming more and more dangerous.

Apart from Turkey, which today, of course, can no longer be considered a third party, but is a direct participant, these days these two countries have come to the aid of the aggressor, Afghanistan and Pakistan. There are reports that mercenaries are being sent to Azerbaijan not only from Syria but also from Pakistan. Russia, of course, can play a significant role as a military-political-strategic ally. Of course, Russia is making some calls these days for an immediate cessation of hostilities, but its leverage to influence the Azerbaijani leadership is greater.

We must clearly understand why this aggression took place right now. The Turkish side, first of all Turkey, calculated that the world is now in a state of panic, that the United States is busy with elections, that the pressure on Russia is unprecedentedly high, especially in Belarus. This moment was chosen specifically so that the superpowers would be busy with their internal affairs and could not respond adequately. But I think that some red lines will be drawn these days, because the superpowers understand that this Turkish-Azerbaijani aggression is directed not only against Armenia and Artsakh, but also for their own interests. I am sure that with a delay, but we will hear clearer positions, especially from the Russian side.

It should be emphasized that, as I have already said, our soldier today not only defends our homeland, but also solves a geopolitical problem. And we here, in the rear, must do the possible and the impossible to help and support our soldiers. And I am sure that the victory will be ours.