I WILL NEVE FORGIVE 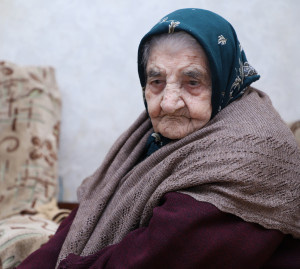 Grandma Yepraksia turned 111 a few days ago. She is in a flowery, shiny headscarf, and in a beautiful dress. She is leaning her head on her grandson Arthur’s shoulder and looks at my face with a smirk. Though she looks younger, I still ask.

“Will you be able to speak, Grandma Yepraksya?”

“I became literate at the American Orphanage in Alexandropol. We were taught both English and Russian. I loved reading, reading all day. I still remember the poems I learned as a child. I know a thousand verses, would you like me to say one?”

“Have you learned them in the Ergir?

Hearing the word Ergir, the grandmother sat up.

“Ergir is Mavrak village of Lalo of Kars. My father’s house.”

It was in the village of Mavrak in Kars. We had many sheep and cows. My father, my mother, my two brothers and I were one family, happy and full.

“Didn’t Turks oppress you?” I asked. Grandmother Epraksya grabs her grandson’s hand, as if to protect herself from some danger.

“There were no Turks in our village, Turks came later. Armenians should stay away from Turks to be safe.”

Grandmother bows her head to her chest and closes her eyes. Artur explains with his hand that I should be silent, not hinder her ‘journey’ to the past. Let her knock on the door with the most tragic events of her life. Look inside the window behind which there is a massacre.

“My mother died on the way to exile. My brothers Hovhannes and Yeghia and I came with the refugees s and arrived in Alexandropol. We were taken to an orphanage. At first, my elder brother Hovhannes was adopted and taken to Yeghvard. Then Yeghia, my younger brother, left the orphanage. He was sent to America. Yeghia was too young. I lost the track of him. I don’t know what happened. My Yeghia! 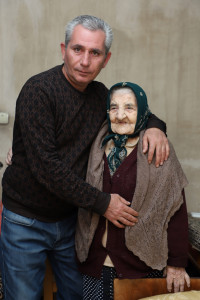 When I was 15, my aunt took me from the orphanage to her home in Ani Pemzashen. Then I married Valad.

“Did you love Valad?: I’m glad we finally closed the door of the past. But Grandma leaves my smile unanswered.

“Had I seed Valad before to love? My aunt said you should get married, I got married.”

“Was Valad a handsome boy?” I kept cheering.

“Valad was an orphan like me.” A refugee.. Our love was kindness. It was a different kind of love. Valad was a shepherd. He was grazing big herds. We had no home, no livelihood. We built a house with our own hands. We had seven children. Two were young when they died and two were adults.

“… They say, will you forgive the Turks?”

“What can I forgive? I will never forgive. Five years ago, on the 100th anniversary of the Genocide, a journalist came from Turkey. He said, ‘I’m Turkish, I’ve come to talk to you.’ I will not talk to the Turks, I said. He knelt in front of me, kissing my hands. Tell me, he said, tell me, tell me your story. I didn’t say anything.”

Then the grandmother asks me:

“Will you forgive the Turks?”