THE SUPERPOWERFUL PROTECTORS OF THE ARMENIAN HEAVENS

The long-awaited and intriguing process began late last year: the phase of replenishing the fleet of the Armenian Armed Forces with new, state-of-the-art Su-30 SM fighters. These powerful “iron birds,” driven by skilful pilots, arrived in Armenia. For months, our military aviators were undergoing training abroad. And recently we had the opportunity to watch the first demonstration flight of the Su-30 SM, this time by our pilots, who, under the leadership of the Chief of the Armed Forces’ Aviation, demonstrated their skills and tricks they acquired in a short period of time. Our pilots now vigorously train to eventually become fully involved in the defense of our country’s borders, making the country even more impregnable. We talked to Col Gagik Aslanyan, Chief of the Armed Forces’ Aviation, 1st Class Pilot.

“Colonel, first of all I would like to congratulate you on this remarkable event. On the day the first fighters arrived, Prime Minister Nikol Pashinyan made the following statement: “This achievement is a landmark in ensuring the security of our country, our people.” Defense Minister David Tonoyan also praised the fact.” 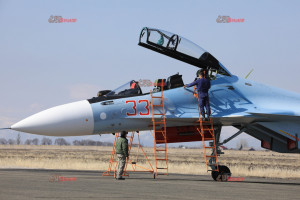 “The expression “landmark” was very accurate in describing our achievement. I can only add that this is a solid and solid basis for reaching the next level. These planes are now part of our country’s important combat potential. But we will not be limited to these. We will consistently enrich our air fleet with other types of military aircraft, helicopters and helicopters.

“Please talk a little about these fighters.”

“As you know, the Su-30 SM is a multi-purpose fighter. It can perform its tasks both in order to gain air superiority and to hit the most important targets of a potential adversary by means of highly accurate aviation strikes. In some cases, it can become an air command station, leading and organizing an air battle.”

“Recently, our pilots showed tricks on Su-30 SM fighters under your guidance made the first demonstration flight, the tricks were very impressive. Achieving such results in a short time would have required a great deal of effort.”

“Of course. We are now mastering this super-powerful aviation technique as quickly and consistently as possible. This is a laborious and complicated process. But I am confident that we will go through this phase smoothly, overcome all kinds of difficulties very quickly and justify the expectations of our people.”

“You did impressive, dizzying exercises …”

“Each of these tricks you’ve seen is designed to accomplish a certain combat task. For example, if the pilot rotates the aircraft 180 degrees at high altitude and makes a rapid landing, this is often done to detect and quickly destroy the target on the ground.”

“You were the first cadet of the Khamperyants Aviation University to fly on his own, earning high command honors. You are now the first pilot in Armenian military aviation to fly a Su-30 SM. What were your feelings at the time?”

“I am glad and proud to have been fortunate enough to be the first pilot to fly a Su-30 SM fighter.”