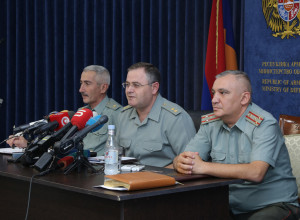 Gen-Lt Artak Davtyan, the chief of the General Staff of the Armenian Armed Forces, held a news conference on 8 October at the Ministry of Defence. He spoke about the results of unprecedented large-scale strategic exercises held in the two Armenian republics from 24 September to 5 October, and answered the reporters’ questions on various topics and issues. Below are Lt-Gen Davtyan’s answers.

The exercises held between 24 September and 5 October in the Republic of Armenia and in the Republic of Artsakh were unprecedented in terms of their length, the extend of forces and resources involved, the number of troop movements and the nature of the tasks. The entire management system of the Armed Forces was tested, the interaction with Artsakh Defense Army as well as cooperation between different types of troops and several new types of armaments and military hardware were tested.

The preliminary summary allows us to say that the Armed Forces have accomplished their objectives. However, it is crucial to understand the results, the effectiveness of our actions, analyse the pros and cons, and draw appropriate conclusions.

The situation on the border is mostly stable and controllable. There have always been tensions, incidents, and now the number of shootings and incidents has decreased. Recently there has been some increase in tension in Tavush region.

I can say that we have adequately reiterated. We never leave any hostile action unanswered.

We acquire up-to-date weapons that require smaller but well-trained crews, and those that are more efficient.

In the near future, there will be upgrades in the armament of the Armenian Armed Forces.