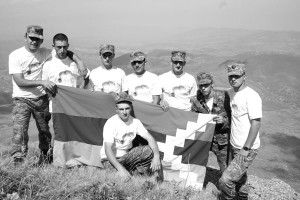 In connection with the 20th anniversary of the Nagorno-Karabakh Republic, the NKR Ministry of Culture and Youth Affairs organized a 2-day pilgrimage to the top of Big Kirse Mountain (2742m). The representatives of NGOs from NKR, Armenia, Georgia, as well as women-veterans of the Artsakh liberation war and soldiers of NKR Army of Defense who were acknowledged the best in service took part in the pilgrimage.

The pilgrimage symbolized the unity of Armenia, NKR and Diaspora and was aimed at inculcating moral and strong-will qualities in participants. “With this pilgrimage we also salute those who liberated this beautiful place of our homeland from Azeri aggressors”, – said Gayaneh Grigoryan, Deputy Minister of Culture and Youth Affairs of NKR.

Hasmik Mikaelyan, head of “Maternity” NGO, in Kirsavan just at the fireplace decorated with medal “Mother’s Gratitude” the best soldiers of the NKR Army of Defense.

Vardan Virabyan, in charge of the expedition, main specialist of Youth Division, NKR Ministry of Culture and Youth Affairs whose ancestors are from Kars (Western Armenia) mentioned: “We’ll continue to organize such kind of functions, and I’ll consider my job done only when one fine day with such an expedition I’ll climb up the top of the liberated Biblical Ararat”.