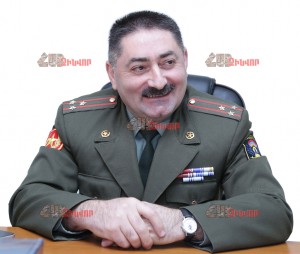 Interview with Deputy Head of Department of Troops Service and Military Service Security of the General Staff of Armed Forces, Colonel Ara Petrosyan.

– We won the war because we had such a commander as Monteh. A whole regiment of armed people did not inspire such confidence to the people, but the only presence of Monteh. We won because we had such a commander as Meruzhan Mosiyan who defended the soldier from the Turk’s bullet with his own body. Do you know why we won the Artsakh war, not the Azerbaijanis? Because when you need to choose between the soil and life, we choose the soil, and the Azeris – life. Pledge of my success is that I can apologize to the soldier, even for errors of my subordinate officers.

Colonel Petrosyan tells, and I think of honoring the thousands of officers who have finished with victory the Artsakh war, liberated part of our historic homeland and gave their life to the fatherland. People need to know their names. Because with your love to the defender of the country is measured your love for the motherland. And in this love lives the hope of return of our age-old losses and building of a strong Armenia.