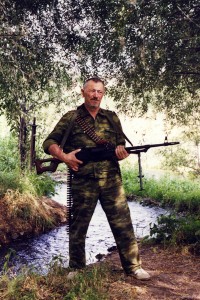 The story “Marauder” of writer, essayist and translator Hovik Vardumyan was awarded a special prize on joint awarding of 2015 of the RA Defense Ministry and the Union of Writers of Armenia.

Hovik Vardumyan, son of Saribek Vardumyan who died during the Second World War, put down his gun only in 1994, when the cease-fire agreement was signed. His path of fighting he began in Yeraskhavan, participated in the battles of self-defense in Noyemberyan, Vardenis, Shahumyan, Gegharkunick, Martakert areas. For faultless military service O.Vardumyan was awarded a number of departmental medals and diplomas of Armenia and NKR. His books have been translated into 15 languages. The book “The liberation of Shoushi”, according to the military theorists, is the best documented writing of the Artsakh war.

– When the Artsakh movement began, I worked as chief designer at the Research Institute of “Aerosol”. The war began. From the guys of the Institute I organized a detachment of 15-20 people. At the same time other groups were also created. The commanders decided to unite in one squad, named “Davit Bek”.

During the war, I realized how important is to overcome the fear. Get over, and you will become a soldier. The most important thing is that the war shows – who you really are. In the battlefield it is not possible to play. For me it was important that I found myself and began to respect myself.

We won not only because our morale is high, but because we are a homogeneous nation, we defended our country, our land. But Azerbaijan had brought to the war Lezgins, Talyshes, mercenaries. Another reason is that Muslims are used to gang combat. They feel good when they are larger. And when they see that they are facing a powerful force, they run away in fear.

During the war, I kept a diary and recorded all events. This is a great wealth for me. Until now, I use these diaries. At that time I wrote a small story – “The Return of the goddess Anahit”. It’s about a terminally ill guy who was treated through love of a girl. In those years, when it was cold, hungry, dark, people were disappointed, this book has helped many people, gave them hope.

After the war, my outlook completely changed. The war has filled my life so much that whenever I want to write on other subjects still war is always present. Each of us should think that the war will begin tomorrow, and must rely solely on the strength of our arms and the spirit. Now we have an army, and this is the most important.

From books of Hovik Vardumyan are “Labyrinth”, “Flow”, “If you forget, I’ll curse you” and others.