THE STORY OF ONE PICTURE OR THE UNFULFILLED LONG-STANDING PROMISE 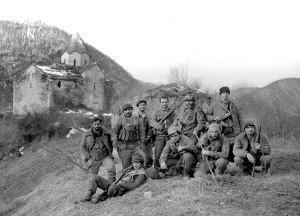 It was the 22nd, or 23rd January, 1993. Two Azerbaijani helicopters opened fire in the direction of the church “Yerits mankunq”, they thought we have hidden there. From the dome the huge cross fell down and broke. The commander of our Special forces group Shahen Meghryan said that we need to restore the cross. And there we all gave word that we’ll set up the cross on its place. Before departure I photographed all of them, and the war took us to different roads.

Soon died Shahen Meghryan, many of the guys. But our oath remained unfulfilled…

One day, 21 years later, when I told friends about it, one of those present, an army officer, Karen Tanguian said he’ll help, because the oath of the guys is to be performed. Specially we went to the church, made measurements, Shahen Meghryan’s brother, Petros also joined us. From leader of the Artsakh Diocese Pargev priest we found out that the size of the cross should be comparable to the size of the church, and that not everyone has the right to make a cross.

Soon Karen Tanguian called and said that the cross is ready… and we, joyful and light-hearted went to church “Yrits mankunq” to perform the oath given 21 years ago by the guys from Special Forces group “Deer”. Cross consecrated the spiritual leader of the Armenian Armed Forces Vrtanes priest.