BACK TO THE POSITION, BUT IN THE OFFICER’S UNIFORM 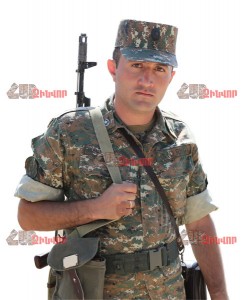 The deputy platoon commander, Sergeant-contractor Gegham Ghazinyan (25 years old) is already 5 years in positions, in the military unit “Deers”. He is the kind of a person, soldier that never sleeps, with his weapon waits and waits.

– I will tell about my soldiers. No one, better than a contractor, understands the soldier. It is said that before criticizing someone, wear his shoes, and pass it along the rocky road on which he was, feel his pain… tears… And only after that say – how to live correctly. What I want to say – every contractor knows how it is – “correctly”…

I also know what the soldier makes happy – sweets. And now he gets sweets with food, and in our time, it was not like that. I also know what inspires the soldier – loyalty of the commander. The soldier’s eye is always watching him – how he is dressed, how he speaks, how behaves, what is his mood. Hope of the soldier is the commander, and he should not be disappointed. A good leader can not have a bad soldier.

I will say one thing, maybe this is not news, but it’s true – dearer soldier we have nothing…

P.S. Gegham Ghazinyan is involved in the Officers’ Course at the Military Institute after Vazgen Sargsyan. A few months later he will return to the position, but in the officer’s uniform. Welcome!