ASHOT DANIELYAN: “I LOVE TO WIN!” 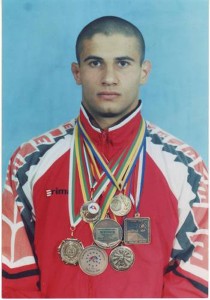 – I always go to the championships with confidence in success and victory. But this time it was incredible to take the 1st place in this weight class, I had no experience in dealing with athletes of 90kg weight category. Before that I played 3 years in the 82 kg weight class. I changed my category, as on the first European competition, which will be held in Baku from 12-28 June 2015, wrestling of 82kg sportsmen will not be provided. I think you have to take part, I am spiritually ready for the trip. Why do not go, the more that I’m in excellent shape and I can come back with a medal? I want our anthem sounds in Baku. And the behavior of the Azerbaijani athlete who recently during the performance of our national anthem sat down, I qualify as a manifestation of ignorance, lack of intelligence. In the international arena the athlete is the face of the country, so this step has characterized an entire nation. After the ceremony, Bakhtiyar Abbasov himself came up to me and congratulated me and said that he is good to me, just in his homeland would be a problem if he was on feet at the time of the Armenian national anthem…

In sambo you win not only by force, your brain has to work, too.

I always wanted to be a world champion. Twice my dream came true. In my opinion, the most interesting was the fight in the finals of the Sambo World Championship, 2013. I almost lost. 40 seconds were left, the score was 4: 1, but I concentrated, rallied and won with a score of 7: 4. And this time was the same situation. I do not like to lose.

It is surprising, but after the victory I feel emptiness. And for all my successes I have honored coach of Armenia, master of sports of RA Ernest Mirzoyan.

In 2003-2005 I served in the army, was recognized as the best army athlete, participated in the European Championship and won a medal. I remember the excitement of my comrades. Army years are the most memorable in my life. Every Armenian primarily is bound to be a soldier. Every victory we get due to the peace deserved by you, dear soldier!