NOW HE IS NOT ONLY MINE… 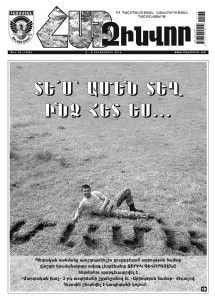 For courage in the defense of the state border company commander Sr. Lieutenant Zorick GEVORGIAN posthumously awarded the Order “Battle Cross” of 2nd degree and the medal “For Courage”.
Hero was awarded the rank of captain.

We were impatiently waiting for the birth of Zorick (since we lost our first child when he was 2 years old). Zorick’s birthday was the happiest day of our family. His grandfather came to the hospital and asked me to choose a name for him, since he was going to get a Birth Certificate for him. He didn’t know that I had already chosen name for my son. Those were the days of Artsakh movement, and I was fascinated by publicist Zori Balayan. I wanted my son to be as smart, well-known, as him, to grow up brave and patriotic. 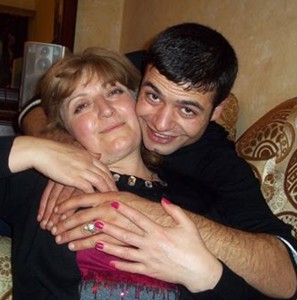 I really wanted him to become a historian, but once Zorick, when he was in the eighth grade, said he would be a soldier. In our family my husband, my brother, his son are military. And Zorick took his documents to the Military Institute, passed the exams and called me up: “Mom, congratulate me! I’ve got admission! Do not be offended, it’s the path of my life! ”

I was very worried when he rose to the position… He said: “Don’t think, nothing will happen to me, your blessing and prayers will protect me”. And once sent his photo with the inscription: “Mom, do not think about me, I’m not alone. You see, everywhere you are with me! “.

He kept saying, “Mom, don’t worry for me, if only with children nothing happened (mean – his soldiers).” He talked about them with love, warmth, with trepidation. One of those guys, junior sergeant Sargis Movsisyan, died in hospital a few days after my Zorick. Till the end he was next to his commander.

… I was very attached to him, loved him very much and I miss him a lot. The only consolation is that now he is not only mine, but also of his people, of the people whom he loved … I’m proud of my son-hero …