VOLUNTARILY – ON THE FRONTLINE! 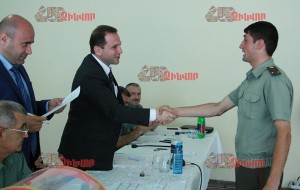 On July 23 graduates of the Military Institute after Vazgen Sargsyan on the principle of the draw had to choose their place of service (regiment). Before the draw 1st Deputy of Defense Minister D.Tonoyan asked – are there those who are willing to serve on the front line voluntarily? Dozens of graduates stood up and without hesitation chose the military units which implement combat duty and are away from the capital for several hundred kilometers. Their choice was awarded with a storm of applause.
We talked to some of them.

Souren Avagyan his decision to serve on the front line took already in 2013, when he was on an internship in one of the performing combat duty military units: “We arrived at night, the commander – Colonel A.Aghhajanyan, a real soldier by his word and behavior – met us. When we woke up in the morning and watched around, we petrified with astonishment: “Such a miracle, wonderful nature, what air!” – we did not cease to admire. As if we were in jungles. And I decided that voluntarily I’ll choose this regiment”.

Hamik Simonyan decided to become a serviceman yet when he was 8. “Once on the way to school I met two servicemen. I asked with interest – what do they do? They replied: we protect our Homeland! And their answer I liked so much that I decided – when I grow up, I’ll protect my Homeland!”

Youra Hakobyan: “I don’t know, all happened spontaneously or inner voice prompted, I can’t say? When my friends applauded, I didn’t understand what’s happening. I don’t consider my choice as heroism or bravery”.

Narek Vardanyan: “During the war my father fought in the group “Eagle”. My father always has been an example for me, and I tried to be like him, to be the same kind, responsive, balanced, responsible person. I wanted my father to be proud of me, so I decided to become a soldier.”