THAT MISDEMEANOR WOULD NOT BECOME A CRIME 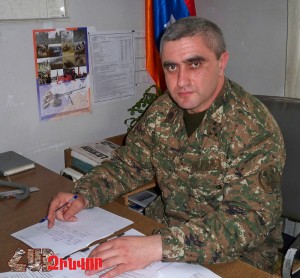 Owing to the activities of the Disciplinary Battalion, the number of statutory violations decreased sharply, and owing to the joint functions with human rights bodies the level of the servicemen’s legal preparation has raised, stated officer on social-legal issues, Captain Ashot Sargsyan from the regiment under the command of Colonel Zhirayr Poghosyan.

– In 2013 only one case of non-statutory relations was registered which was given an appropriate settlement in the framework of the regiment. There were no offenses of a criminal nature, during the year no serviceman was convicted, – informed A.Sargsyan.

– Especially actively we cooperate with the military police. Joint talks as well as preventive and explanatory work on legal issues are being organized.

Ashot Sargsyan emphasizes that in case of misdeeds without criminal elements, servicemen could get punishment in the regiment without the involvement of legal authorities.