GEVORG VARDANYAN: “THE MAIN QUALITY OF THE SECRET SERVICE AGENT IS THE LOVE FOR HOMELAND!” 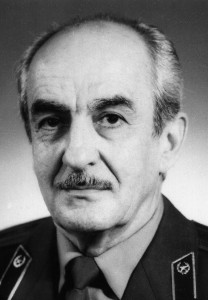 It is 90th anniversary of Gevorg Vardanyan, the legend of Soviet and world intelligence service, prominent son of the Armenian nation

On February 17 legendary Soviet SSA Gevorg Vardanyan would have been 90. He is the only SSA of the USSR who got the Golden Star of the Soviet Union’s Hero not during war-time, and during his life-time.

It is already 2 years that he is not with us. He was buried on February 13, 2012 in the Troyekurov cemetery of Moscow with all the military honors. Vladimir Putin was present during the burial ceremony.

General Youriy Drozdov in his autobiographical book “Memoires of illegal intelligence service’s chief” speaks about Vardanyan: “He is equal to Zorge, Abel, Folby… Perhaps better than they…”

On the order of Defense Minister S.Ohanyan “Gevorg Vardanyan” medal has been created to perpetuate the memory of the legendary SSA in his Motherland.