“RISK IS THE FATHER OF INTELLIGENCE SERVICE, CAUTION IS THE MOTHER” 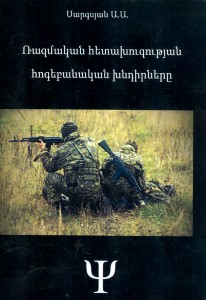 The book is based on his war experience. In the foreword the author says that despite the fact that modern armed forces are being equipped with the newest technology and equipment, however one should not underestimate the human factor because combat operation’s success most dependent on it.

According to A.Sargsyan, military secret service agent’s profession is “an elite military profession. If you can become a soldier but you should be born as SSA».