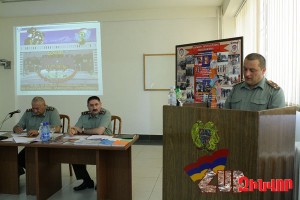 On July 13th in the Military Institute after V.Sargsyan a meeting-discussion of troops’ service was held according to the RA AF preparation training plan of 2013. The aim of the meeting was to present a report on fulfilled tasks given by the Defense Minister as well as on achievements and slips.

It was assigned to the service’s responsibles to finalize results of the 1st half of 2013 and in the 2nd half of the year to sharply raise theoretical knowledge of the officers in organization of troops’ service.