ARMENIAN SOLDIER WILL HAVE NO NEEDS TO FULFILL COMBAT MISSIONS 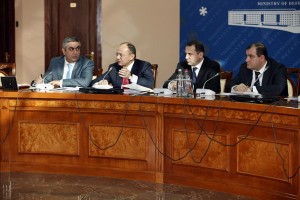 Keeping the positive results of 2011, in 2012 significant progress was registered in strengthening of staff’s discipline, as a result the number of crimes and rule violations decreased.

According to the Minister, “in 2012 the staff fully accomplished the combat missions, with the least losses, intrusion of diversionary groups was prevented.

Mr.Ohanyan mentioned that arms and armaments, both imported and of home production, were prepared for combat application, successfully were tested during the military exercises. “We have the possibility to shoot the more important strategic objects without any harm to the peaceful population”.