NO RIGHT TO ERR 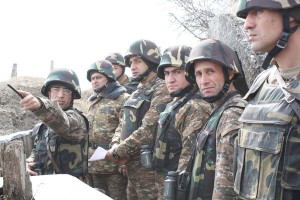 The regiment under the command of Colonel M.Mahsudyan realizes combat duty, defends the security of the borders of Armenia. However the command is aware that effective and secure combat duty basically is stipulated with full-fledged organization of operational training.

– How the situation on the border will be tensed we have no right to make mistakes during the training, – told Colonel Mahsudyan. – Our regiment is on the border, and the smallest omission would hamper the combat duty.