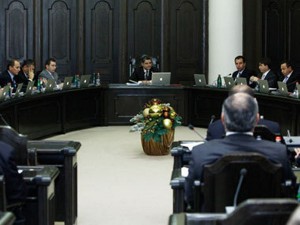 The military education of the soldiers in the RA Armed Forces is organized and implemented on the basis of current legal acts – decisions of the RA Government and the orders of the RA Minister of Defense. Within the absence of a general doctrinal approach, the military-educational system being a component of the RA educational system, develops slowly, which creates difficulties in the regular flexible policy of the officer, non-commissioned officer staff and the ranks of the RA Armed Forces and in the process of their qualification. Within the content of defense reforms, the development of the system of military education is considered a predominant problem. In compliance with this, the legal insertion of the doctrinal approaches will present an opportunity for a more effective implementation of the promotion of the cadres possessing the military knowledge and skills of servicemen and having high qualification.

The Doctrine approved by the RA Government anticipates guaranteeing the logical connection of every position and respective educational criteria, the role of civil higher educational institutions of the RA and educational institutions abroad in the process of preparing officer staff of the RA Armed Forces. It is also envisaged to insert in a short-term and long-term perspectives the system of the education and training of the professional staff of officers and non-commissioned officers of the RA AF, as well as the system of academic education of the officer staff of the RA AF in conformity with the criteria of RA civil higher education and the Bologna process.