IF WAR IS YOURS, PEACE WILL ALSO BE YOURS 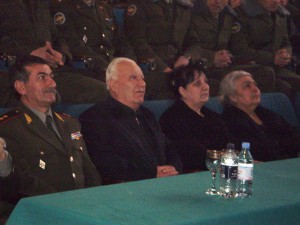 Choosing these words of Commander Vazgen Sargsyan as a slogan, the 3-rd anniversary of this statesman and military personality was celebrated in the Military Institute bearing his name due to the joint efforts of the students of State Pedagogical University after Khachatur Abovyan and the students of the Military Institute. Parents of the National Hero were present at this event. Through warlike and patriotic songs and performances, staged episodes the life of Vazgen Sargsyan was once more presented, his contribution to the victory of the fight for freedom in Artsakh and to the formation of national army was recalled and marked with importance.